Difference between revisions of "Artificial intelligence"

Artificial intelligence (also AI) refers to a software construct capable of near-human, human, or super-human levels of intelligence. Defining characteristics of any AI include machine learning.

Open source projects to develop AI include OpenAI and OpenCog.

There are various types of AI which can generally be broken down into two categories; Weak AI and Strong AI.

TechnoPedia describes the differences between the two as; "Weak artificial intelligence is a form of AI specifically designed to be focused on a narrow task and to seem very intelligent at it. It contrasts with strong AI, in which an AI is capable of all and any cognitive functions that a human may have, and is in essence no different than a real human mind." [1]

AI has been featured heavily in many sci-fi films including A.I., Transcendence, Ex Machina and Avengers: Age of Ultron 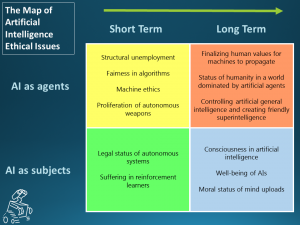 Upper left: Machine ethics, technological unemployment, autonomous weapons, and other short-term issues caused by machine learning algorithms.
Lower left: Concerns related to the (moral or legal) treatment of AIs in the near term. See PETRL for some speculative ideas.
Upper right: Concerns relating to artificial superintelligence and the AI Control Problem. MIRI mainly works on this corner.
Treatment of digital minds: FRI studies on strategies to reduce suffering in the far-future, including the suffering of digital beings.

There are many different ethical concerns related to AI, which can best be understood by plotting them across two axes: time scale and agent vs. subject.