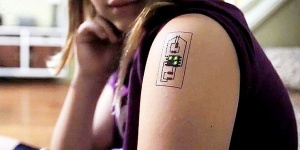 Body modification means to deliberately alter one’s physical appearance, though people usually assume the phrase applies only to such practices as tattooing and piercing or the more esoteric branding and scarification.[1]

Body modification occurs across the globe today in various forms and for many reasons (Barker & Barker, 2002, p. 92). Examples of body modifications from around the world include nose piercing associated with Hinduism, neck elongation in Thailand and Africa, henna tattooing in Southeast Asia and the Middle East, tooth filing in Bali, lip piercing and earlobe stretching in Africa, and female and male circumcision in many areas of the world (Larkin 2004; Barker & Barker 2002; Bendle 2004).

Two prominent historical examples of body modification are foot-binding and corseting. For hundreds of years, foot binding was commonly performed in China on girls, beginning between the ages of 3 and 7 and continuing throughout their lives. All toes but the big one were broken and folded under. The foot was then wrapped very tightly. The bandages were changed frequently, maintaining constant pressure. By the end of the process, women’s feet were usually only a few inches long (Hong 1997). Men reportedly found the tiny feet, swishy walk, and apparent frailty highly erotic. Although foot binding essentially crippled the women who underwent the process, parents continued the practice to improve their daughter’s chances of attracting a husband. When China was opened to the West, the process began to die out, and by the 1950s it was largely a relic of the past.

Other cultures have imposed similarly constrictive and debilitating body modifications on women’s bodies. In Western nations during the Victorian era, women were expected to wear stiff corsets in an attempt to obtain the ideal curvaceous feminine figure with broad hips and tiny waists, cinched as small as 12 inches (Riordan, 2007: 263). Such corseting was, in fact, a form of permanent body modification. With severely tight lacing, women’s bodies came to “literally incorporate the corset as the ribs and internal organs gradually adapt[ed] to its shape” (Riordan, 2007:263). This practice both reflected ideas about women’s natural frailty and contributed to such notions, as tight lacing left many short of breath and even unable to stand for long periods of time without support.

While such restrictive corsetry has gone out of fashion, Western women and girls are now encouraged to discipline and control their bodies with other practices such as extreme dieting and punishing exercise regimes. In addition, both women and men in the US today are increasingly modifying their bodies through practices such as cosmetic surgery, body piercing, tattooing and tanning.[2]