The following is an original infographic from User:Deku-shrub. It is not considered exhaustive of various opinions, nor does every label imply a follower of that position is exclusively in that space. It is however designed to be a helpful introduction to a variety of futurist and transhumanist positions to be used as starting place to finding out more about them. 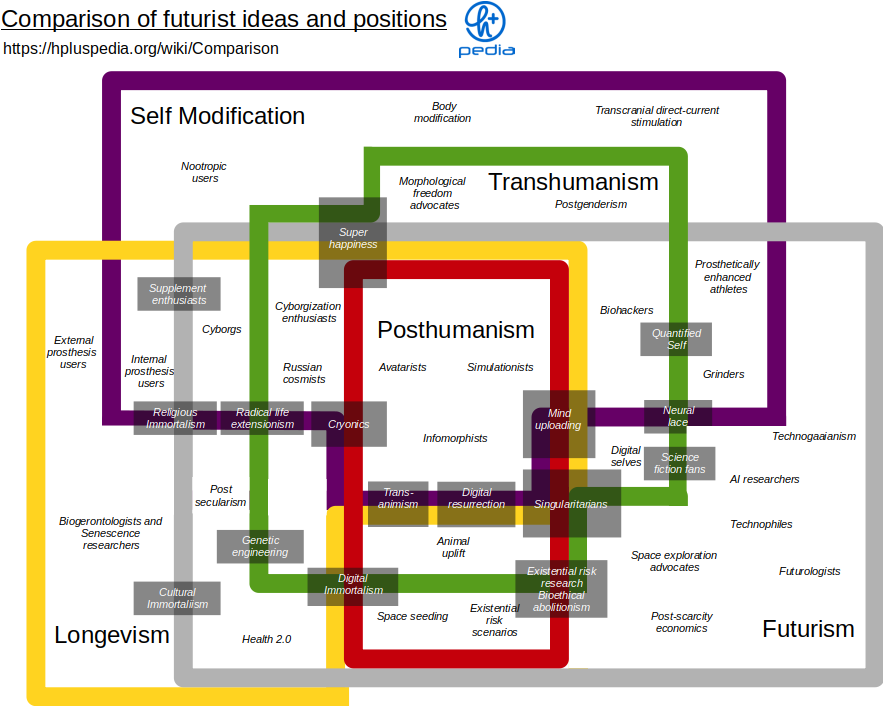 When I wrote "Transhumanist jargon for the discerning time traveller" I was inspired from researching what I considered the main streams in transhumanist and futurist identification, which I identified as life extension, futurism, singularitarianism, transhumanism and biohacking. Healthy debate ensued as to whether all life extensionist transhumanists were in fact singularitarians, and I conceded that I was wrong on that front. My use of the small area for biohacking was an ommision I regretted so I set out to create a greater diagram.

This diagram would feature more detailed examples, edge cases and more intersections with the aim of showing the breadth of transhumanist related positions. Some of the major changes from the first iteration was placing posthumanism as a central subset of transhumanism - as the two concepts are closely related. Singularitarians were repositioned to futurist/transhumanists and placed alongside the rising numbers of AI risk advocates.

Identifying examples of different positions was entertaining and frustrating, especially considering that this is a fundamentally arbitrary grouping of ideas, hopefully presented in a not-too leading fashion.

Having iterated through it several times myself as well as privately with some feedback, I consider it a mostly correct diagram that can be incrementally improved in the future.

Issues, omissions and rooms for improvement

Given the originality of the infographic, I am quite pleased I managed to find many distinct positions to place within each intersecting ideology.

My somewhat arbitrary distinction between biopunk and cyberpunk grinders illustrates I am not very well informed about these areas just now.

The relative absence of non-modified posthumans is certainly food for thought in posthuman circles.

There are likely a number of other questionable decisions, many of which could be improved upon which I have not yet identified.