Difference between revisions of "David Orban" 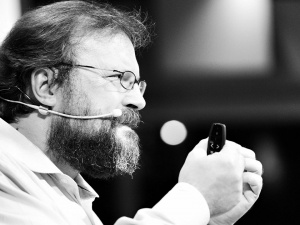 David Orban is the Founder and Managing Partner of Network Society Ventures, a seed stage global investment firm focused on innovative startups at the intersection of exponential technologies and decentralized networks.[1]

"An early adopter of blockchain technologies and an active Bitcoin investor since 2010, he was the first to own Ether during the Ethereum launch in 2014. He also led the adoption of Bitcoin and blockchain in start-ups and is an advisor and investor in numerous blockchain companies and funds, such as Bitnation, Sun Exchange, Wealth Migrate, Blockchain Capital, Bancor, Swarm Fund, and others. David was the keynote speaker at the first Ethereal Summit in May 2017 in New York with an inspiring vision of how blockchain technologies will catalyze a phase change in the socio-economic organization of our societies.

David is the Founder and a Trustee of Network Society Research, a London-based global think tank present in over 40 countries, creating a vision and analytical tools to allow individuals, enterprises and the society at large to deal positively with the unstoppable transformation to a world based on decentralized exponential technologies that are disrupting the traditional centralized and hierarchical functions of governments and corporations.

He is the Founder and Chairman of Network Society Lab, a Venture Development firm that focuses on adding value to startup companies that are based upon exponential technologies and decentralized networks, with a specific focus on designing, organizing and implementing cryptographic token sale events."[2]