Difference between revisions of "Extropy Magazines"

The following article refers both to the 1988 Extropy: Vaccine For Future Shock and the later Extropy: Journal of Transhumanist Thought, the print publications of what would later become the Extropy Institute and a major part of Extropianism.

Extropy: Vaccine For Future Shock, started by Max More and Prof. Tom Bell (T.0. Morrow), debuted in August 1988 as a printed magazine, with only fifty copies of the first issue. The title became Extropy: Journal of Transhumanist Thought, and a total of seventeen issues were published. Then, in November 1997, it moved to the Web as Extropy Online, where articles continued to be published for three years. After a year of dormancy, it returned to the Web in February 2002 as its current form, Extropy: Journal of Transhumanist Solutions.[1] 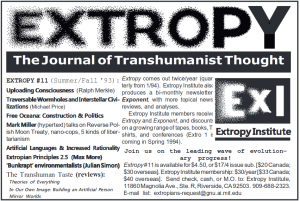 Below, the first extropy advertisement, used by Tom Bell and Max More in the Fall of 1988 to promote the first few issues of their journal.[2][3] 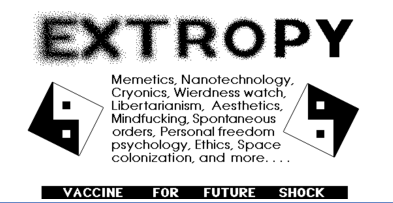