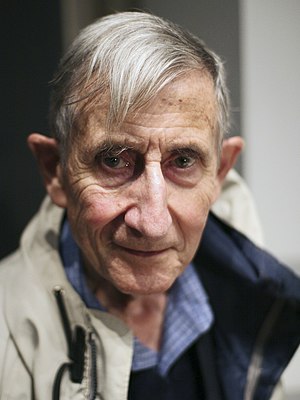 Freeman Dyson was an English-born American theoretical physicist and mathematician.[1] He developed the concepts for a number of futurist technologies including the eponymous Dyson sphere. He died in 2020.[2]

He was a skeptic of the concept of a sudden fast takeoff technological singularity[3][4] but is often associated with transhumanism and exponential technologies.[2] He predicted a post-human future with the universe filled with life in all directions, but not necessarily human life.[5]

Dyson claims that transhumanism describes what is possible today, cannot be achieved with the solutions of modern technology, but what will affect us soon, because transhumanism forecasts are based on the current state of technology and are linked to the directions of its development.[6]

...Dyson: I do not believe in any kind of ism. I believe we understand very little about human nature, about psychology or about economics. I do not take seriously any of the people who claim to predict the future. I believe them even less when they claim to be accurate predictors.[7]

Dyson was a critic of climate change being treated as a global priority, pointing to alternative technological solutions ranging from geo-engineering and biotechnology. Biotechnology to genetically engineer 4 inch tall humans[8][9][10] was even considered, with limited life spans rather than any life extension solutions.[11]