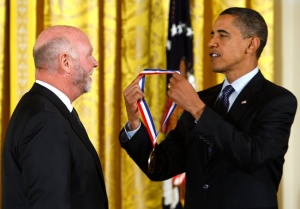 J. Craig Venter received a 2008 National Medal of Science for his contributions to genomics. He's now under scrutiny from the scientific community.[1]

J. Craig Venter is regarded as one of the leading scientists of the 21st century for his numerous invaluable contributions to genomic research. Dr. Venter is Founder, Chairman, and CEO of the J. Craig Venter Institute (JCVI), a not-for-profit, research organization with approximately 200 scientists and staff dedicated to human, microbial, plant, synthetic and environmental genomic research, and the exploration of social and ethical issues in genomics.[2]

His company in San Diego, Health Nucleus X (HNX), is an advanced health assessment for people who are curious and want to know more about their state of health. Designed as an early screening and detection platform, HNX analyzes advanced full-body and brain MRI, as well as whole genome sequencing, to provide you and your physician with a deep view into your potential health risks…EARLY…when they can be optimally addressed.[4]