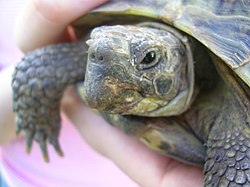 There are many examples of species for whose organisms scientists have not detected an increase in mortality rate after maturity. This may mean that the lifespan of the organism is so long that researchers' subjects have not yet lived up to the time when a measure of the species' longevity can be made. Turtles, for example, were once thought to lack senescence, but more extensive observations have found evidence of decreasing fitness with age.[1]

There are also organismsTemplate:Which that exhibit negative senescence, whereby mortality chronologically decreases as the organism ages, for all or part of the life cycle, in disagreement with the Gompertz–Makeham law of mortality[3] (see also Late-life mortality deceleration). Furthermore, there are species that have been observed to regress to a larval state and regrow into adults multiple times, such as Turritopsis dohrnii.[4]

Recent studies have indicated a connection between phenomena related to negligible senescence and the general stability of an organism's genome, specifically transcription processes, over its lifetime.[5]

Some fish, such as some varieties of sturgeon and rougheye rockfish, and some tortoises and turtles[6] are thought to be negligibly senescent, although recent research on turtles has uncovered evidence of senescence in the wild.[1] The age of a captured fish specimen can be measured by examining growth patterns similar to tree rings on the otoliths (parts of motion-sensing organs).[7]

In plants, aspen trees are one example of biological immortality. Each individual tree can live for 40–150 years above ground, but the root system of the clonal colony is long-lived. In some cases, this is for thousands of years, sending up new trunks as the older trunks die off above ground. One such colony in Utah, given the nickname of "Pando", is estimated to be 80,000 years old, making it possibly the oldest living colony of aspens.[8]

The world's oldest known living non-clonal organism was the Methuselah tree of the species Pinus longaeva growing high in the White Mountains of Inyo County in eastern California, aged Template:Age as of date years.[9] This record was superseded in 2012 by another Great Basin bristlecone pine located in the same region as Methuselah, and was estimated to be 5062 years old. The tree was sampled by Edmund Schulman and dated by Tom Harlan.[10]

Among bacteria, individual organisms are vulnerable and can easily die, but on the level of the colony, bacteria can live indefinitely. The two daughter bacteria resulting from cell division of a parent bacterium can be regarded as unique individuals or as members of a biologically “immortal” colony.[11] The two daughter cells can be regarded as “rejuvenated” copies of the parent cell because damaged macromolecules have been split between the two cells and diluted.[12] See asexual reproduction.

Some examples of maximum observed life span of animals thought to be negligibly senescent are:

Some rare organisms, such as tardigrades, usually have short lifespans, but are able to survive for thousands of years — and, perhaps, indefinitely — if they enter into the state of cryptobiosis, whereby their metabolism is reversibly suspended. It is hypothesized by advocates of cryonics that the human central nervous system can be similarly put into a state of suspended animation shortly before brain death to be revived at a future point in the technological development of humankind when such operation would be possible.[citation needed]