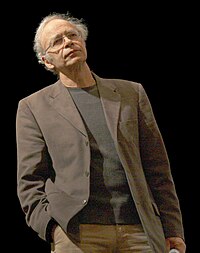 Peter Singer is an Australian moral philosopher.[1] He is perhaps the most famous contemporary utilitarian ethicist. His 1975 book Animal Liberation is sometimes cited as the beginning of the modern animal advocacy movement. He is also known for his essay Famine, Affluence, and Morality, which argued that there is a strong ethical obligation to donate money to help those who are less well-off, and influenced the development of the effective altruism movement. His more controversial views include arguing that parents should have a right to euthanize their severely disabled infants.

Singer believes that it is wrong to discount the value of future lives, except for the uncertainty of whether they will exist.[3] He has discussed Nick Bostrom's argument for the overwhelming importance of reducing existential risk,[4][5][6][7] and is an advisor to the Centre for the Study of Existential Risk,[8] although he has exercised discretion when speaking publicly as he believes few are likely to be convinced.[9][3]

Singer believes that we should be doing more to ensure that advanced artificial intelligence will be ethical.[10] As a utilitarian concerned with the well-being of all creatures, he also believes that the interests of sentient machines ought to be taken into consideration.[11]

In the early 1990s, Singer wrote an article outlining some possible objections to radical life extension from a total utilitarian perspective.[12] Mark Alan Walker has responded, providing some utilitarian counterarguments in favor of life extension,[13] while Russell Blackford has argued that moral pluralist approach (rather than total utility view) can avoid the problems raised by Singer.[14][15] More recently, Singer seems to have been persuaded by Aubrey de Grey that life extension research should be a medical priority.[16]

Singer supports the abolition of suffering through technology and is interested in the prospect of moral enhancement.[17] As a utilitarian, he does not have any fundamental objections to human bioenhancement, and thinks it could be a very positive thing, assuming the consequences for global well-being are positive.[3] He discussed abolitionism and genetic engineering with David Pearce.[18]