Difference between revisions of "RAFT 2035" 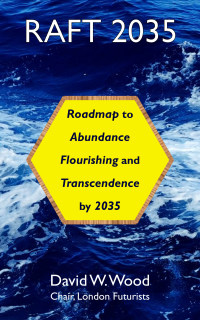 The book poses the question[1], "How good could life become by 2035, if people really apply themselves to the task?"

It provides the following answer:

Thanks to the thoughtful application of breakthroughs in science and technology, the future can be profoundly better than the present. 2035 could see an abundance of all-round human flourishing, with no-one left behind.

However, the book also highlights deep problems and challenges with the adoption and usage of emerging new technologies. Accomplishment of the abundance envisioned will depend on a growing number of people in all areas of society:

The book seeks to explain what are the actions required.

The book explains its context as follows.

The fifteen years from 2020 to 2035 could be the most turbulent of human history. Revolutions are gathering pace in four overlapping fields of technology: nanotech, biotech, infotech, and cognotech, or NBIC for short. In combination, these NBIC revolutions offer enormous new possibilities. These possibilities include enormous opportunities alongside enormous risks:

Rapid technological change tends to provoke a turbulent social reaction. Old certainties fade. New winners arrive on the scene, flaunting their power, and upturning previous networks of relationships. Within the general public, a sense of alienation and disruption mingles with a sense of profound possibility. Fear and hope jostle each other. Whilst some social metrics indicate major progress, others indicate major setbacks. The claim “You’ve never had it so good” coexists with the counterclaim “It’s going to be worse than ever”. To add to the bewilderment, there seems to be lots of evidence confirming both views.

The greater the pace of change, the more intense the dislocation. Due to the increased scale, speed, and global nature of the ongoing NBIC revolutions, the disruptions that followed in the wake of previous industrial revolutions – traumatic though they were – are likely to be dwarfed in comparison to what lies ahead.

The author of RAFT 2035 has explained the choice of term "RAFT" as follows:[2]

The cover of RAFT 2035 depicts a raft sitting on top of waves of turbulence.

As is stated in RAFT’s opening chapter, the forthcoming floods of technological and social change set in motion by the NBIC revolutions could turn our world upside down, more quickly and more brutally than we expected. When turbulent waters are bearing down fast, having a sturdy raft at hand can be the difference between life and death.

Turbulent times require a space for shelter and reflection, clear navigational vision despite the mists of uncertainty, and a powerful engine for us to pursue our own direction, rather than just being carried along by forces outside our control. In other words, turbulent times require a powerful “raft” – a roadmap to a future in which the extraordinary powers latent in NBIC technologies are used to raise humanity to new levels of flourishing, rather than driving us over some dreadful precipice.

To spell out the “RAFT” acronym, the turbulent times ahead require:

RAFT 2035 envisions the possibility, by 2035, of an abundance of human flourishing in each of six sectors of human life:

RAFT 2035 offers clear goals for what can be accomplished in each of these six sectors by 2035 – 15 goals in total, for society to keep firmly in mind between now and that date.

The goals also highlight how the development and adoption of science and technology can, and must, be guided by the very best of human thinking and values.

The main content of RAFT 2035 look at the rationale for each of the goals, methods by which these goals can be accomplished, and, in each case, interim targets to be met by 2025.

RAFT 2035 proposes collaboration and activism around various interim targets which RAFT outlines for achievement by 2025.

The FAQ chapter near the end of RAFT 2035 provides a summary of these interim targets:[3]

In the category “demonstrations of tangible progress with new technologies or new solutions”:

In the category “clarifications of potential new systems, metrics, or processes, via which greater flourishing can be made available to all”:

And in the category “miscellaneous additional milestones en route to human transcendence”:

People interested in the possibility of supporting RAFT projects are invited to join discussions in the #raft channel in the London Futurists Slack.[4]