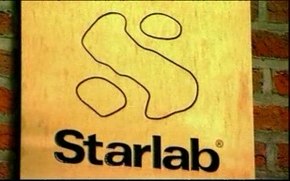 Starlab NV/SA was a multidisciplinary, blue sky research institute established to serve as an incubator for long-term and basic research in the spirit of Bell Labs, MIT Media Lab, Xerox PARC, and Interval Research.[1]

Its primary headquarters was based in Brussels, Belgium from 1996 to 2001. A second base of operations, Starlab Barcelona, was established in 2000 and remains in operation. A recent spinoff, Neuroelectrics, commercializes several innovations developed at the lab.

Starlab was intended as a “Noah's Ark,” a utopian environment for some of the world's most brilliant and creative scientists, researchers and engineers.[2] Its research mottos included “Deep Future” and “a place where one hundred years means nothing.”[2]

Starlab's business model depended largely upon third-party investment to sustain its operations. When the dot-com bubble burst, the loss of a critical group of investors forced the lab to close its doors in 2001. The lab's assets were liquidated, and the former embassy building inhabited by the lab was purchased by the Brussels regional government.

The surviving research division in Barcelona, Starlab DF2, or "Deep Future 2," adopted a different business strategy, focusing on specialized, direct contracts with ESA under support of the Catalan and Spanish Governments. Founded by Manel Adell, Giulio Ruffini, and Ana Maiques, Starlab Barcelona maintains the interdisciplinary spirit of Starlab Brussels, but focuses on space and neuroscience technologies and applications. The lab has been awarded the Barcelona Innovation prize and other awards from ENDESA and BMW Innovation.

Much of the intellectual property generated by Starlab research projects was purchased by investors or continued at university and research centers worldwide. Philips purchased the intellectual property rights to intelligent clothing project i-wear, which won the Avantex 2000 Innovation Prize. Bioprocessors, a biotechnology spinoff, transitioned to Silicon Valley. An IPTV license continues to generate revenue under an anonymous purchaser. Pajamanation, a global marketplace for outsourcing microjobs, launched in fifty countries in 2006.

Financial Times spinoff Sifted produced a contemporary retrospective on the lab's heritage, “Starlab: The ‘Noah's Ark’ of scientific research that launched 1000 startup ideas,” tracing Starlab's legacy and continuing influence through the years. The article features interviews with several prominent alumni, including Ana Maiques, cofounder of Starlab Barcelona; Aureli Soria-Frisch, Starlab’s director of neuroscience; Giulio Rufini, neuroscientist and current CEO at Starlab; and Christopher Altman, UAPx and The Galileo Project for the Systematic Scientific Search for Evidence of Extraterrestrial Technological Artifacts at Harvard University. “Some argue that Starlab’s greatest legacy isn’t in the scientific advances or spinoff businesses that it created, but in the way it encouraged those who walked through its doors to think in a truly unique way.” [18]