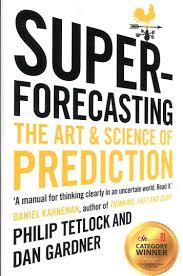 Superforecasting: The Art and Science of Prediction is a future focused book by Philip E. Tetlock and Dan Gardner that describes a set of methods to improve forecasting abilities.

The book draws on:

Forecasters and superforecasters from the Good Judgement Project submitted more than 10,000 predictions over four years in response to questions about the likelihood of specified outcomes happening within given timescales over the following 3-12 months. Forecasts addressed the fields of geopolitics and economics.

The book highlights the following characteristics as being the cause of the success of superforecasters:

Edge has published a series of videos of five "master-classes" taught by Philip Tetlock on the subject of superforecasting: