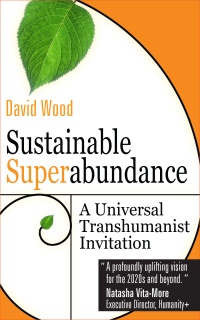 Sustainable Superabundance is a 2019 book by David Wood with the subtitle "A Universal Transhumanist Invitation".

The author has described the book as "a wake-up call and a call to action." [1]

It is positioned as being the fourth book-length publication from the Transpolitica think tank.

The book looks forward to "A new era... at hand: the era of sustainable superabundance. In this era, the positive potential of humanity can develop in truly profound ways."[2]

Key themes of the book are described as follows:

The good news is that twenty first century science and technology, developed and deployed wisely, can enable a sustainable superabundance of human flourishing in all seven of these spheres.

The bad news is that there is nothing inevitable about such an outcome. Science and technology, by themselves, cannot guarantee the emergence of sustainable superabundance. Instead... it will be imperative to pay close attention to critical elements of the broader social context within which science and technology operate, namely, politics, economics, the investment landscape, and the public mood. Astute collective management of these elements will make all the difference between superabundance and super-tragedy.[3]

The first chapter of the book refers to "hard, critical choices... choices that will determine our future":

We face some hard, critical choices – choices that will determine our future. If we choose poorly, technology will do much more harm than good. If we choose poorly, a bleak future awaits us – wretched environmental decline, bitter social divisions, and a rapid descent into a dismal new dark age. Instead of the flourishing of the better angels of our human nature, it will be our inner demons that technology magnifies...

If we choose well, constraints which have long overshadowed human existence can soon be lifted. Instead of physical decay and growing age-related infirmity, an abundance of health and longevity awaits us. Instead of collective dimwittedness and blinkered failures of reasoning, an abundance of intelligence and wisdom is within our reach. Instead of morbid depression and emotional alienation – instead of envy and egotism – we can achieve an abundance of mental and spiritual wellbeing. Instead of a society laden with deception, abuses of power, and divisive factionalism, we can embrace an abundance of democracy – a flourishing of transparency, access, mutual support, collective insight, and opportunity for all, with no one left behind.

The chapter goes on to highlight the importance of understanding the potential scale of this transformation:

As the 2020s approach, with their accelerating pace of change, with ever more potent technologies in wide circulation, and with a perplexing variety of tangled interconnections threatening unpredictable consequences, there’s something that is very important for us to collectively keep in mind.

The thought that deserves sustained attention, in the midst of all other considerations, is the central insight of a group of people known as transhumanists. This insight concerns the magnitude of the forthcoming transformation from humanity to transhumanity.

Call to action for transhumanists

The first chapter of the book extends a call-to-action to transhumanists:

As the 2020s approach, it is time for transhumanists to challenge and reorient the public narrative. It is time to raise the calibre of the collective conversation about the future.

It is time to affirm how the future can be hugely better than the present. It is time to clarify how human nature is but a starting point for a journey to extraordinary posthuman capability. It is time to emphasise that, whereas the evolution of life has been blind for billions of years, it is now passing into our conscious, thoughtful control. It is time to point out that, whereas the evolution of society has been dominated for centuries by economic matters and struggles over scarce resources, centre stage can soon feature the blossoming of abundance. And it is time to proclaim that powerful enablers for these exceptional changes are already arriving, here and now.

In short, it is time for transhumanists around the world to step up to the responsibility as catalysts of the forthcoming transformation. It is time for transhumanists to inspire and support people everywhere to join together in the historic project to build the era of sustainable superabundance. It is time to apply transhumanist wisdom to identify and uphold the best choices in anticipation of the tumult of disruption that lies ahead. It is time to ensure that technology brings universal benefit, rather than being something we will come to bitterly regret.

At present, we can glimpse only the broad outlines of the coming era of sustainable superabundance. It is the fundamental responsibility of transhumanists to discern the forthcoming contours with greater clarity, and to help humanity as a whole envision and navigate the pathways ahead.

No superabundance without transhumanism

A later section of the book, in Chapter 4 ("Principles and priorities"), argues that superabundance cannot be achieved without transhumanism:

In order for us to achieve the superabundance envisioned... there will first have to be significant improvements to human nature. Superabundance will not feature present-day humans in a new environment. It will feature humans enhanced in fundamental ways, freed from core defects that have hitherto limited our accomplishments. It will feature humans on a transhumanist journey towards transcendent posthuman capabilities.

The book acknowledges that it touches on many questions for which no clear answers are yet available. The book requests that readers be willing to carry out further work on these questions.

Example questions explicitly mentioned in the book, in Chapter 11 ("Towards abundant democracy") are as follows: