The Abolition of Aging 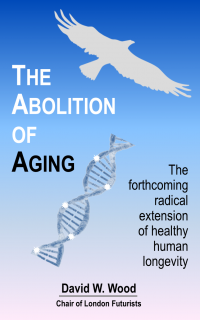 A bird’s eye report from the frontiers of the accelerating field of rejuvenation biology:

Taking its lead from trial use of the term[2] by Aubrey de Grey at the 2010 Humanity+ UK event in London, the book refers[3] to the "Rejuveneering project":

A multi-decade cross-disciplinary endeavour to engineer human rejuvenation and thereby enable the choice to abolish aging.

The book defends the argument[3] that the rejuveneering project has around a 50% chance of comprehensive success by the year 2040:

Within our collective grasp dwells the remarkable possibility of the abolition of biological aging.

It’s a big “if”, but if we decide as a species to make this project a priority, there’s around a 50% chance that practical rejuvenation therapies resulting in the comprehensive reversal of aging will be widely available as early as 2040.

People everywhere, on the application of these treatments, will, if they wish, stop becoming biologically older. Instead, again if they wish, they’ll start to become biologically younger, in both body and mind, as rejuvenation therapies take hold. In short, everyone will have the option to become ageless.

The book uses the term "abolition" in explicit reference[3] to the prior abolition of slavery:

Accepting aging can be compared to accepting slavery.

For millennia, people from all social classes took slavery for granted. Thoughtful participants may have seen drawbacks with the system, but they assumed that there was no alternative to the basic fact of slavery. They could not conceive how society would function properly without slaves. Even the Bible takes slavery as a given. There is no Mosaic commandment which says “Thou shalt not keep slaves”. Nor is there anything in the New Testament that tells slave owners to set their slaves free.

But in recent times, thank goodness, the public mind changed. The accepting-slavery paradigm wilted in the face of a crescendo of opposing arguments. As with slavery, so also with aging: the time will come for its abolition. The public will cease to take aging for granted. They’ll stop believing in spurious justifications for its inevitability. They’ll demand better. They’ll see how rejuvenation is ready to be embraced.

One reason why slavery is so objectionable is the extent of its curtailment of human opportunity – the denial of free choice to the people enslaved. Another reason is that life expectancy of slaves frequently fell far short of the life expectancy of people not enslaved. As such, slavery can be counted as a major killer: it accelerated death.

From the anticipating-rejuvenation perspective, aging should be seen as the biggest killer of all. Compared to “standard” killers of the present day, such as drunken driving, terrorism, lead fumes, or other carcinogens – killers which rouse us to action to constrain them – aging destroys many more people. Globally, aging is the cause of at least two thirds of human deaths. Aging is the awful elephant in the room, which we have collectively learned to ignore, but which we must learn to recognise and challenge anew.

Every single week the rejuveneering project is delayed, hundreds of thousands more people suffer and die worldwide due to aging-related diseases. Advocates of rejuveneering see this ongoing situation as a needless slaughter. It’s an intolerable offence against human potential.

The book's website notes[4] that H+Pedia can be used to highlight and update information as identified at the end of the book as critical for the overall success of the rejuveneering project: