The Silicon Ideology is an journal-style 20 page essay uploaded to archive.org in May 2016 by a pseudonymous blogger Josephine Armistead. It features an analysis of the history of fascism and is highly critical of elements Silicon Valley, technolibertarianism, technological utopianism, the modern alt-right and the influences of the likes of Michael Anissimov, Less Wrong and transhumanism in the formation of the neo-reactionary movement.[1][2]

Transhumanism I define to be a collection of movements aimed at improving and enhancing humanity through technological means. Almost immediately, we see a precursor, and one which influenced the previous reactionary ideology of 20th century fascism: eugenics. But let us not tar all transhumanism with eugenics, though it must carry its historical burden. Transhumanism first gained currency in 1990, though it had been developing from eugenics since the end of the Second World War, often through the medium of science-fiction. In 1965, the notion of technological singularity was developed: of course, the concept of artificial intelligence had been developing earlier. Organized groups of transhumanists began to gather at UCLA in the early 1980s, many of whom would subscribe to the “Third Way” of the 1990s (not to be confused with third positionism, another word for fascism) and thus become either centrists, others, stemming from the Extropians who formed in 1988, were libertarians. As seen in the disputes in 2006 at the World Transhumanist Association and from the ideologies of the Extropians, the libertarians largely did not see the necessity of universalism for a transhumanist project: they thus were comfortable with a class system being strengthened by transhumanism–indeed, reinforced it through the idea of meritocracy. They, too, were more comfortable with the eugenics programs of old, now largely framed (as then) through ableism: preventing “liabilities” (mostly disabled and neurodivergent people, though the more homophobic and transphobic element are looking for biological bases for gay-ness and trans-ness to include them here, and racists of course include people of colour) as opposed to “assets” from being born. This of course is a reflection of the fact that both the eugenics of old and the right-transhumanism (if we can call it that, as opposed to left-transhumanism, which seems largely limited to left-accelerationists) have applied liberal bourgeois ideology (one might point in particular to utilitarianism). Perhaps now it is clearer how transhumanism–more specifically, right-transhumanism fits here. 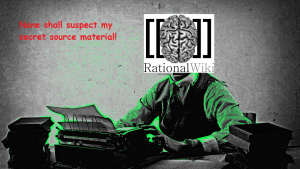 None shall suspect my secret source material!

The article's name is based on The Californian Ideology and given it's contemporary subject matter did rather well at the time given how new and relevant some of the ideas were.[3] However much of the mystery was overstated:

The author of the essay is Josephine Armistead. Armistead has been impossible to get in touch with. She has virtually no internet presence. This is because the name is a pseudonym. As far as I can tell the only person who’s had some sort of contact with Armistead is Sam Keeper, a blogger who posted a download link for the piece on Tumblr on May 18. “I was sent this by a blogger who shall remain pseudonymous (because let’s be real these are some nasty people to tangle with),” Keeper wrote. Keeper has not responded to multiple emails.

The only community to take the relevant level of interest in both LessWrong and the neo-reactionary movement is RationalWiki. The proprietor of RationalWiki themselves admits to have been in direct contact:[4]

I've chatted with the author of the linked paper about it. They are quite young and it is pretty much a blog post formatted like a paper. I noted to them that it would have been rather better without that praxis at the end. I think they're quite nice really, but of course others may feel this paper is prima facie evidence they aren't.

The essay is comprehensively debunked on Reddit on a /r/badphilosophy thread.