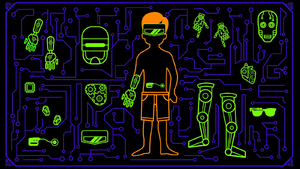 Where the party at?

Transhumanist Music for Cyborgs Top 20 [1] is a public playlist available on the YouTube machine.

The playlist is voted on monthly and organized by Dalton Murray.

Does Transhumanist Music deserve its very own Genre?

"Transhumanism is a philosophical and intellectual movement which advocates for the enhancement of the human condition by developing and making widely available sophisticated technologies that can greatly enhance longevity and cognition. It also predicts the inevitability of such technologies in the future.[1][2] Music is an arrangement of sounds having melody, rhythm, and usually harmony combined in such a way as to produce beauty of form … and expression of emotion. [2] </> and Genre is a category of some artistic composition … characterized by similarities in form, style, or subject matter. [3][1]

“Do you like Music? Are you a Transhumanist or cyborg wannabe?”

This is a community inspired project. Ask everyone what they think ... start with just ten songs, Top Ten.

It’s your turn. ! Choose a song and enter it in the comments. (first one wins a secret prize - that nobody tells you about for 7 days)

About the other older (2018) page called Transhumanist music

"Explicitly transhumanist music is small area in itself. Typically lyrics with heavy futuristic references will be combined with a range of genres from rap to folk to pop to create often highly expository media. Alexey Turchin was one of the first to compile a YouTube playlist of such music as a playlist for an event. Areas such as are well established in their own right as are pop songs with themes of immortality and robotics, with others spanning a wide range of genres and transhumanist themes."