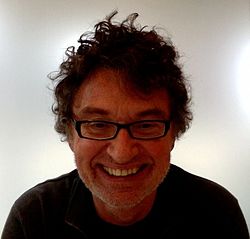 He is an Entrepreneur in Residence with the Centre for Entrepreneurial Learning at Judge Business School at the University of Cambridge since 2004;[1] he sits on the editorial advisory board of the Journal for Chinese Entrepreneurship[2] and is a member of the American Mathematical Society and serves as a board director of the Tau Zero Foundation.[3]

De Brouwer published personal computer magazines starting in 1990 under the company name Riverland Publications, which was sold to VNU in 1994.[4][5] In 2008, De Brouwer set up OLPC Europe, the European branch of One Laptop per Child.[6][7][8]

Starlab was a multidisciplinary, blue sky research institute established to serve as an incubator for long-term and basic research in the spirit of Bell Labs, MIT Media Lab, Xerox PARC, and Interval Research. The lab specialized in “Deep Future” blue skies research, [12][13] and coordinated its research activities under the acronym BANG—Bits, Atoms, Neurons and Genes—a system later adopted by MIT in 2002.

Starlab's business model depended largely upon third-party investment to sustain its operations. When the dot-com bubble burst, the loss of a critical group of investors forced the lab to close its doors in 2001.[16][17]

Starlab was frequently cited by the international press, become subject of a theatre play at the Edinburgh Festival, a Gartner case study, and has spawned alumni forums on Facebook and Yahoo!Groups. Media coverage included such comparisons as as the "lab of last resort” (CNN);[18] attracting “the world’s brainiest nerds."[19] as “Nerd Heaven” (Discovery Channel).[20]

De Brouwer serves as a director of the board with the Tau Zero Foundation,[21] successor to the NASA

Breakthrough Propulsion Physics Program on Wikipedia. The organization published The Frontiers of Propulsion[22][23] as a comprehensive summary of its research developments under NASA support. In April 2017, NASA awarded the organization a $500,000 grant for the study of breakthrough propulsion programs under a proposal entitled Interstellar Propulsion Review.[24][25]

Driven by a lack of advanced diagnostic technology in the medical profession in an experience which affected his son, De Brouwer co-founded Doc.ai, a company focused on decentralizing precision medicine with artificial intelligence. The company completed a successful ICO in the summer of 2017, and is expected to launch its first product in Spring 2018.

De Brouwer is former co-founder and the CEO of Scanadu, a company located at the NASA Ames Research Park in California. Scanadu is developing consumer health diagnostic devices such as the Scanadu Scout, designed to measure various physiological parameters that include temperature, heart rate, blood oxygenation, respiratory rate, ECG, and diastolic/systolic blood pressure;[26][27] and Scanaflo, an at-home, full-panel urinalysis testing device designed to give consumers immediate information about their liver health, urinary tract infections, and other vitals.[28]

De Brouwer transitioned from Scanadu CEO in April 2016[29] to became the CEO and co-founder of artificial intelligence start-up Doc.ai.[30]

De Brouwer is a Fellow of the Royal Society of Arts and served as President of RSA Europe from 2006 to 2008.[31] He is a member of TED and curator of TEDxBrussels and is a sponsor of Quantified Self Labs.[32] He was a distinguished lecturer at the National Science Foundation in 2013.[33]

De Brouwer is a Fellow of the Royal Society of Arts and served as President of RSA Europe from 2006 to 2008. He is a member of TED and curator of TEDxBrussels and is a sponsor of Quantified Self Labs. He was a distinguished lecturer at the National Science Foundation in 2013.