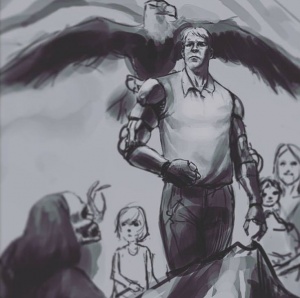 He has supported a number of traditional transhumanist political positions, as well as some more emerging ones such as drug legalisation.

Zoltan's political stance is hard to categorize and Zoltan admits[2] that his position has evolved over time. While many have judged him to have a libertarian background, Zoltan is a self-proclaimed pragmatist and survivalist , saying he will advocate for whatever policies "will most quickly lead to indefinite life extension". In Zoltan's view, the correct policy mix includes large government investments in research and education, 'chips'[3] that track the movement and economic transactions of each citizen, and some form of universal basic income. Zoltan's positions have been attacked strongly by transhumanists on both the left and right of the political spectrum for his authoritarian tendencies.

An increasingly controversial figure in the wider transhumanist community,[12][13] his headline-grabbing policy ideas have sometimes placed him at odds with others. An unabashed atheist, Zoltan has written[14] and lectured[15] about the relationship between religion and transhumanism. He has said[16] and written that religion is holding back science and the development of technologies, pointing to stem cell therapy as a specific example. These positions have caused great ire amongst religious transhumanists, many of whom see is anti-religious viewpoint as inextricably linked to his policy. For example, christian transhumanist Christopher Benek proclaimed "A Vote for The U.S. Transhumanist Party Presidential Candidate Is A Vote For Tyranny".[17] In March 2015 he described himself as a "atheistcideist", believing super intelligence-like God may have existed at one point, but probably ended its own existence to give free will to the universe.[18]

Zoltan's platform has been criticised for closing membership, misrepresenting the party's legal status, individualist policy development and poor board communication.[19]

In response to an impasse in community engagement with the strategy and vision of Zoltan's Transhumanist Party, the community-driven Transhuman National Committee of the United States was founded on the 5th of October 2015.[20]

These events marked the organisations known collectively as the Transhumanist Party movement splitting into two blocks.

His campaign has included touring the United States in the Immortality Bus. In his Singularity 1 on 1 interview,[2] Zoltan credits the bus as the key to the success of his campaign. As a highly visible publicity platform, it garnered an enormous amount of media coverage.