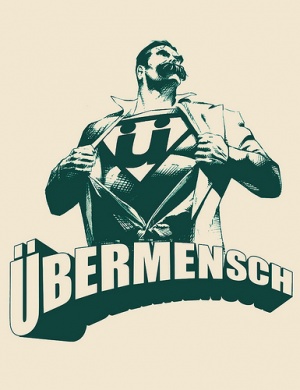 The Übermensch is a concept in the philosophy of Friedrich Nietzsche.[1] It is German for "Overman, Superman, Superhuman, Hyperman, Hyperhuman".

Max More was one of the first to relate the concept to transhumanism[2], arguing transhumanist ideas are directly influenced by Nietzsche:[3]

Whilst the term is still popular with transhumanists,[4] it has been criticised for associations with the rejection of democracy, the historical use by the Nazi regime and the divisive potential the idea holds.[5] Indeed, the term is still in use by white supremacists.[6]