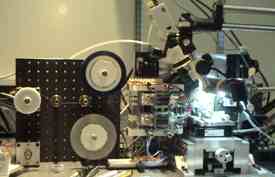 Invented by transhumanist Ken Hayworth, the ATLUM is essentially a rotating block of tissue (typically 1 to 2mm in width, 10mm in length, and 0.5mm in depth) mounted on a steel axle. As the tissue is turned by an ultraprecise bearing, the microtome (an ultrathin knife) advances by means of a piezoelectric component, creating a spiral cut of 40nm-thick tissue, which slides onto the water on the back surface of the microtome. The slice is then sandwiched between two carbon-coated mylar tapes, replacing the need for dexterous undergraduates to manually position the sections on a TEM grid.

The tape has the extra benefits of being a sturdy substrate and preventing charging and beam damage during the scan. The position of the knife relative to the axle can be held to within approximately 10nm, so that many square millimeters of tissue can be sectioned.

After sectioning, the tissue can be preserved for later imaging, or exposed to heavy metals for SEM. This produces greater signal to noise ratios and much faster imaging time that what is provided by SBFSEM and FIBSEM. Imaging can also be done through the backscattering signal, like in SBFSEM and FIBSEM, allowing the ATLUM to work without the need for a TEM grid and disposes of width-of-section limitations.

Images obtained with an ATLUM are of a quality equivalent to that of traditional TEM, with a lateral resolution above 5nm. ATLUM-collected sections can be subject to tomographic tilt (See SSET), giving aditional depth data. This is done by tilting the section at various angles relative to the SEM beam, giving depth resolutions greater than that of the thickness itself.

One of the main differences between the ATLUM and other microtomes is that others engage in discontinuous motion—that is, sweep forward, collect a slice into the water boat, sweep back, and repeat. The ATLUM generates a continuous cut by moving in a spiral manner around the sample. There may be some problems reconstructing large volumes from EMs of slices that are flat but must be mapped to tubular surfaces of decreasing diameter (e.g. the brain), a problem avoided by having straight, one-above-the-other cuts.

The ATLUM produces a single tape of tissue, while others produce independent slices that must be gathered and set in an orderly manner. The ATLUM does not have this problem. In an ordinary ultramicrotome, an accident that randomizes the slices will ruin the entire process. In the ATLUM, one only needs to distinguish one end from the other.

With an ATLUM, one can scan volumes of brain tissue in the range of cubic millimeters in a completely automated manner, unlike SSET and SSTEM, which are only semi-automated, wherein the operator must manually recover tissue from the knife's water boat and, again, manually place it into TEM slot grids using an eyelash—an inefficient and unreliable process.