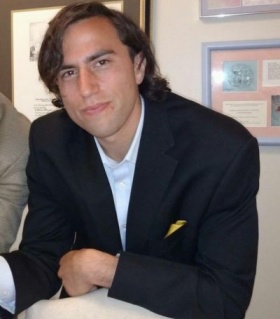 Aaron Traywick was a prominent American life extension activist in the transhumanism and biohacking communities. He was a staunch advocate for CRISPR-Cas9 gene editing therapies in hopes of making widely accessible and inexpensive treatments available to the public for heretofore incurable conditions such as AIDS and the herpes simplex virus.

Traywick's lack of any formal medical training and his unconventional methods—such as broadcasting an associate injecting himself with an “untested experimental gene therapy,” then later doing the same to himself in an onstage public demonstration—drew widespread criticism and attention.

He was found dead under mysterious circumstances in April 2018.

Aaron Traywick was a resident of Elmore, Alabama and a graduate of Stanhope Elmore High School.[1] He graduated from the University of Montevallo in Alabama with a degree in interdisciplinary studies; he held no specialized background in the sciences or formal training in clinical medicine.[2]

In 2016 Traywick worked to advocate investment in radical approaches towards anti-aging at the Global Healthspan Policy Institute. In 2017 he founded Ascendance Biomedical in Washington DC with the mission to “make cutting edge biomedical technologies available for everyone,” serving as its CEO.[3] His bold and unconventional methods were widely featured in press articles and interviews including BBC News, MIT Technology Review, Popular Mechanics, The Atlantic, Gizmodo, The Verge, Futurism, IFLScience, BioEdge Reddit, and others—in particular highlighting his controversial DIY homemade gene therapies.

In October 2017, an associate of Traywick's, Tristan Roberts, injected himself with "untested, experimental gene therapy" using Facebook Live, broadcasting the event to users all over the world. In February 2018 at the BioHacking Con in Austin, Texas, Traywick publicly injected himself with what he referred to at the time as a "research compound." In later conversation with BBC reporters he referred to it as a "treatment"—a distinction of consequence under FDA regulations. Shortly after the event, the FDA issued a stern response on the inherent dangers of such a reckless approach to untested gene editing, without mentioning the company by name:

“The FDA is aware that gene therapy products intended for self-administration and “do it yourself” kits to produce gene therapies for self-administration are being made available to the public. The sale of these products is against the law. FDA is concerned about the safety risks involved. Consumers are cautioned to make sure that any gene therapy they are considering has either been approved by FDA or is being studied under appropriate regulatory oversight.”

— US Food and Drug Administration

At the time of his death, Traywick was planning a CRISPR gene therapy trial for the treatment of lung cancer in Tijuana, Mexico and served as managing director for Inovium Rejuvenation, which is conducting pre-enrollment for FDA-approved trials in several US locations to reverse menopause, rejuvenate ovaries, restore fertility and bring hormone levels back in line with those found in youth. He was featured as a primary subject in an as-yet unreleased documentary film, Transhuman: Biohackers and Immortalists,[4] directed by Ford Fischer.[5][6]

Traywick was found unconscious in a sensory deprivation isolation tank, or “float pod,” at Soulex Float Spa in Washington, DC at 11:30 am ET on Sunday, April 29, 2018.[7] A Soulex spa spokesperson informed reporters that the spa's co-owner arrived twenty minutes after Traywick's scheduled session completion and asked why someone was still in the float room. Upon further investigation, it was found that the door to Traywick's room was ajar, though clients usually float in the nude and the door should have been locked. The room was dark, though its automatic lights should have been activated upon opening of the tank's lid. Traywick was discovered in the tank, which had automatically drained by that point. Emergency responders arrived within four minutes of the spa's 911 call.

Traywick’s body was taken to the Office of the Chief Medical Examiner for an autopsy. A spokesperson for the spa told reporters that DC police twice told her they found drug paraphernalia among his belongings. DC police did not confirm the detail.[8]

An autopsy report provided to Bloomberg News on June 28 by the Office of the Chief Medical Examiner showed Traywick's cause of death to be drowning, with the drug ketamine present in his system. Ketamine, a dissociative anesthetic, is sometimes used as a recreational drug.[9]

News of Traywick's unexpected death sent resounding shockwaves through the transhumanist community and was widely covered in the media over the days following, including TIME Magazine, Newsweek, the BBC, and the Washington Post. The U.S. Transhumanist Party issued an official statement on the matter.[10]

“Aaron was a passionate visionary. He seemingly never tired as he brought people together to work on some of the most imposing challenges facing humanity. While many in the biohacking scene disagreed with his methods, none of them doubted his intentions. He sought nothing short of a revolution in biomedicine; the democratization of science and the opening of the flood gates for global healing.”

Much of his professional life and death was covered in the New York Times.[11] Traywick was 28 years old.