Aging as a disease 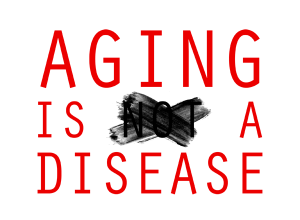 Aging is a disease

Aging as a disease is a key element behind some life extension and longevism arguments.

Is Aging a Disease?

Aging, or ageing, as a disease has been proposed by many longevity advocates as the key principle behind their work. But is Aging a disease?

If you take the following definition; "A disease is a particular abnormal condition, a disorder of a structure or function, that affects part or all of an organism. The study of disease is called pathology which includes the causal study of etiology. Disease is often construed as a medical condition associated with specific symptoms and signs."[1] then you could say that it is.

A disease is a particular abnormal condition, a disorder of a structure or function, that affects part or all of an organism.

Aging can safely be said to effect the entire organism. Joints get worse, skin wrinkles and sags, bones become weak, etc. Is this abnormal? If you consider that when people are younger that everything tends to work and function properly than in an older person, then you could argue that it is.

The study of disease is called pathology which includes the causal study of etiology.

Pathology as defined by wikipedia is as follows:

"Clinical pathology is a medical specialty that is concerned with the diagnosis of disease based on the laboratory analysis of bodily fluids such as blood and urine, as well as tissues, using the tools of chemistry, clinical microbiology, hematology and molecular pathology."[2]

It's probably fair to say that pathology deals with the diseases of old age in this respect. But what is Etiology?

So Etiologically, you may say it is fair to classify aging as the origins of age related diseases.

Disease is often construed as a medical condition associated with specific symptoms and signs.

As above, there are very clear symptoms relating to aging; Decreased energy, skin damage, loss of muscle mass, and various others are all age related.

Biological markers (which could be said to be signs) of aging are also being found.

As an active process of self destruction

One of the points of debate of whether aging is a passive process of damage accumulation, or something quite active that can potentially be more easily switched off.[4]

Many established gerontologists have been critical of the efforts of life extensionists to label ageing a disease.[5][6]

In December 2015 an article appeared on statnews.com that said:

"It would seem silly to call such a thing a “disease.” On the other hand, scientists are increasingly learning that aging and biological age are two different things, and that the former is a key risk factor for conditions such as heart disease, cancer, arthritis, Alzheimer's disease, and many more."[7]

I don’t actually say aging is a disease. Aging is bad for you, it’s a medical problem, but that’s just language.

It was always known that the body accumulates damage. The only way to cure aging is to find ways to repair that damage. I think of it as preventive medicine for age-related conditions.

What matters, de Grey added, is understanding that aging is curable.

Dementia[8], a term which covers a broad range of age-related neurological pathologies is already classified as a disease, covering a range of conditions such including different forms of Alzheimers, effectively describing the undesirable mental effects strongly correlated with the aging process.

Many other age-correlated conditions may also qualify.