From H+Pedia
Jump to navigation Jump to search
Trailer

The series is based on the 2002 novel trilogy written by Richard K. Morgan.

In a dystopian future, most people have utilised ubiquitous mind uploading technologies to create digital immortality via a spinal 'cortical stack' implant, in a process known as 'resleeving'. Neo-catholic minorities reject the technology, in turn making them extra vulnerable to criminals. The setting features light speed transmission via needlecast[2], and a long-lived Methuselan elite caste (colloquially known as "Meths").

The protagonist of the series is former Envoy Corps military operative Takeshi Kovács, whose stack has been taken from prison and resleeved in order to investigate the death of a Meth named Laurens Bancroft; ruled a suicide, but Bancroft's backup is convinced that he was murdered.

Elements of transhumanism and specific social consequences of life extension technologies are explored in some of the greatest detail that science fiction television has done previously.

In the universe of Altered Carbon, there is wide spread acceptance that one's consciousness exists unambigiously within the special 'stack' implant devices. Implanted at age 1, it doesn't appear to be a Ghost in the Shell level brain-replacement cyberbrain. Most likely it features a copy of memory and personality and a consciousness bridge combined, effectively allowing a consciousness to 'be' an organic brain and the stack at the same time.

Assuming continuity of consciousness within the stack itself, there are a number of other unanswered questions:

The alien origin of the stack technology is alluded to but is left mostly unexplored so far. 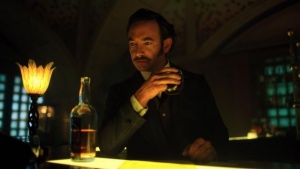 In the future, like in Passengers, AGIs will serve you drinks and be classier than you

It is unclear why only the super rich can afford regular wireless stack backups, as they only take a few seconds, and why even the richest Meths don't know how to run an incremental or differential backup rather than constantly overwriting their full backups.

Insecure biometric authentication in the form of fingerprint payments are inexplicably utilized, presumably for the usual reason of appearing future-y.

Insecure networks are accessed by 'dippers' who steal memories as well as run-of-the-mill hacking. Even the CCTV can be hacked by an individual with advanced interference technologies.

Virtual reality technology can provide an almost real life level of immersion and sensation, but not to a level that a sufficiently lucid participant cannot realise they are in a construct, thus limiting the scope of they were in a simulation all along plot lines.

The environment is not one of ubiquitous surveillance and privacy is not yet dead, hence use of an eye-implanted camera is exceptional rather than a standard feature of an eye augmentation. Similarly, the 'private' fight club somehow manages to prevent unauthorised recordings, whilst secretly taking VHS recordings because the non-digital format is more secure.

Augmentation is a strangely widespread yet limited. Relatively minor cosmetic alterations and makeup produce a classic cyberpunk aesthetic, but not to the extent of many non-humanoid forms or new forms of being. More major physical alterations are made for the popular blood sports of heavily augmented humans fighting to the sleeve-death.

Bionic limbs are an affordable alternative to resleeving.

Ordinary humans, at least at police level, have a one-eye augmented reality implant or contact lens paired with some kind of audio microphone and speaker implant which functions fairly similarly to a contemporary mobile phone in its functionality.

Despite these apparent limitations it is apparently possible for a human consciousness to exist in a sex robot or even a snake. Monkey needs a hug

The denizens of the Altered Carbon universe are really into life extension, to the point that many of the powerful long-lived 'meths' can be argued to be immortalists. Hand-waving the many problems of digital resurrection from a personal point of view, the external continuity of power, wealth and position is maintained by many immortal Meths. However the very conclusion of the season leading to presumed stepping down of Laurens Bancroft suggests that a significant personal or political scandal can disrupt even the most powerful Meth.

Cloned bodies, synthetic bodies, virtual reality existence and even sex robots ensures there are range of modes of existence available, at a price.

The materialistic and indulgent tastes of the super rich Meths are portrayed as a predictable consequence of extreme longevity even from 250 years prior to the events of the main series. Tiger feasts, mind-snake imprisonment, VR torture factories, byzantine cross-sleeving bedroom antics, husband and wife duels to the death, sexual violence and (usually legal) murder are depicted as commonplace and accepted by nearly all members of society except the audience surrogate Takeshi Kovács.

Not only is the setting of Altered Carbon highly critical of the Meth's social, economic and moral positions, the back story features 'the uprising' attempting and failing to prevent this state of affairs 250 years ago by modifying stack technology. Their failed attempt to artificially limit human life spans to 100 years would have immediately killed millions in the world of Altered Carbon, as well as billions in the future, making their ambitions highly deathist, despite well intentioned socially-minded ambitions.

Irreversible concentration of wealth and power was predicted and is depicted as a direct consequence of the life-extended stack technology, rather than a failure of economic, political or social policy making it an archetypal example of oligarchic transhumanism.

The Blade Runner-esque cyberpunk setting is rife with corruption, sexual exploitation, pollution, poverty, drug abuse and dehumanisation all appearing to stem from the Meth-dominated economic system.