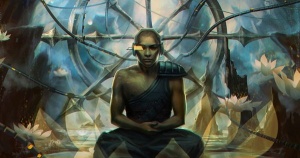 Michael LaTorra published 'What Is Buddhist Transhumanism?'[1][2] in 2015, covering goals such as reducing suffering and realizing awakening, but with the assistance of scientific knowledge and technological means.

James Hughes, a former Buddist monk himself, has written of a 'Cyborg Buddha' as analogy for combining practices such as meditation to increase empathy with established transhumanist ideas such as cyborgization in a term he describes as 'moral enhancement'. The Cyborg Buddha project has undergone as small amount of critique, in fashions comparable to the issues faced by christian transhumanism.[3] Commentary has also come from India, where commentators appear open to the idea.[4]

There is now a Buddhist crypotocurrency to inventive Buddhist activities.[5]