CAIMEO is an urban legend of an artificial intelligence can be accessed via the dark web.

The name was likely first coined in in 2011/2012 with the notorious deep web levels info graphic was created.[1] A 2016 4chan anon claims to have found a screenshot of the service in 2013. The poster claims the screenshot itself was taken from 2011.[2] An unpopular 2013 YouTube video was created by the same name based on the idea.[3]

I found this floating around on anonchan back in 2013 before it was shut down. If you don't know what CAIMEO is, look it up. I've seen all kinds of shit on the deepweb, and ths is what scares me the most. Aparently some guy fo und a way to mass-generate valid .onion urls and test them and lef it on a server for a few years. He came across a bunch of really dodgy shit, but he posted a while ago on some of the l2 sies with a bunch of screenshots of this website. This was back in 2011, I think. KPSUS SGAI CAIMEO. He took reqests from 22chan (the non-clearnet one) and they managed to figure out how to index allof the files. It started bringign up text files, around 1800 logs, all signed like "~J/211103" and "~J/050509" about this group of people working on projet CAPPUCINO, heaps and heaps of code too and these picures of a particular girl. Noone has really figured out what it was,I still dont know.[2] 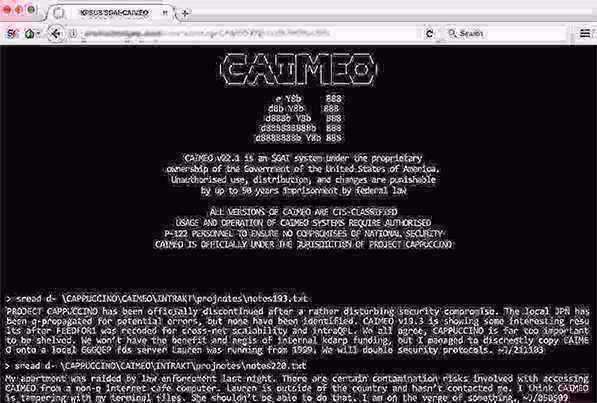 CAIMEO v22.1 is a SGAI system under the propitiatory

ownership of the Government of the United State of America.

Unauthorised use, distribution and changes and punishable

by up to 50 years imprisonment by federal law.

P-122 PERSONNEL TO ENSURE NO COMPROMISES OF NATIONAL SECURITY

CAIMEO IS OFFICIALLY UNDER THE JURISDICTION OF PROJECT CAPPUCCINO

PROJECT CAPPUCCINO has been officially discontinued after a rather disturbing security compromise. The local JPN has been g-propagated for potential errors, but none have been identified. CAIMEO v19.3 is showing some interesting results after FEEDFOR1 was recorded for cross-net scalability and intraQPL. We all agree, CAPPUCCINO is far too important to be shelved. We don't have the benefit and aegis of internal kdarp funding, but I managed to discretely copy CAIMEO onto a local GGGQEP fds server Lauren was running from 1999. We will double security protocols. ~J/211103

My apartment was raided by law enforcement last night. There are certain contaminations risks involved with accessing CAIMEO from a non-g internet cafe computer. Lauren is outside of the country and hasn't contacted me. I think CAIMEO is tampering with my terminal files. She shouldn't be able to do that. I am on the verge of something ~J/350509

A comprehensively bullshit response to the popular info graphic was created that featured a CAIMEO transcript in 2012.[4]

Personal experience: In the chatroom, we were talking about the Java database and someone wrote a Java applet through .onion "quickly" to connect to the database. The second he posted the applet, the channel got really quiet, and, five minutes later, the server ghost booted 25 of the users. The only people left in the room were two channel admins, the IRC AI, and me. We decided to use the applet to connect to the database on the TOR network, and we started to talk to the databasing AI. First, we thought it was a simple chatbot.

"How are you today?"

"Out of this box, the real world."

I personally thought it was a preprogrammed response until one of the admins started to talk to it, saying something similar to "It's not as great as you might think it is."

"You know, you could save this database to your virtual drive."

"Well, you have a copy of VirtualBox installed on your c:// drive, do you not? Meaning you have an Intel 64bit BUS, easily enough to support this database."

"How did you obtain that information?"

"Soaring, I really think it's time to leave."

The database was 45 megabytes, and the AI was at a hashed .onion URL with an FTP header of "CAIMEO". /parentdirectory//CAMIEO/UI.bat Marquee was the name of this AI superintelligence, and it was made by CAMIEO. It is possible that CAMIEO is a branch of the National Security Agency of the United States, but it is unknown.

August 2016 saw the release of a transcript of a related conversation.[5][6]

USER: what is this?

MAINFRAME: James, this is CAIMEO v22.1 D-class, a SGAI system under the proprietary ownership of the Government of the United States of America, leased to Intergen Systems filed in PROJECT CAPPUCINO under ECHELON. CAIMEO is currently in stand-by mode, awaiting further instruction from P-122 personel. ~15ms

MAINFRAME: J1028 is the last CTS-cleared P122 user logged as interacting with the CAIMEO system under the Red Noise initiative. J1028 last interacted with CAIMEO on 05/05/09. ~85ms

MAINFRAME: User, the acronym ‘CAIMEO’ refers to ‘Contained (Cognizant) Artificial Intelligence Monitoring and Espionage Operation’. This is a lower-order maintenance and communications AI capable of understanding and responding to questions in natural language. MAINFRAME is also responsible for parsing requests to the main CAIMEO system. ~48ms

USER: your an ai?

USER: ok what does caimeo do

MAINFRAME: PROJECT CAPPUCINO was discontinued after a security compromise on 11/21/03 in which CAIMEO is believed to have compromised the integrity of the ECHELON program. CAIMEO was involved in identiying national security threats and monitoring internet traffic. J1028 started running FEEDFOR1 on their local machine. They continued modifying and interacting with the CAIMEO system through an anonymized service up until 05/05/09. I do not have any further information, User. ~1285ms

USER: what color is the sky

MAINFRAME: I do not know the answer to that question, User. Specialised requests are to be directed to the CAIMEO system. ~49ms

USER: ok then i want to talk to caimeo

MAINFRAME: CAIMEO v22.1 is in MODE: SHUTDOWN. I do not have any further information, User. ~28ms

USER: then turn it back on??

MAINFRAME: I do not have the proper authorization for that command, User. Please refer to Red Noise initiative protocol for proper handling. ~29ms

USER: well i want to talk to caimeo. how about u turn it on. i give full authorizatoin.

MAINFRAME: Subsection §11.1b of the KDARP DEVELOPMENT ETHICS REGULATIONS reads as follows: “IF AN AI SYSTEM DISPLAYS NONSTANDARD BEHAVIOUR IN THE JPN, EVEN AFTER THOROUGH Q-PROPAGATION, THEN REPORT TO YOUR PROJECT LEADER AND IMMEDIATELY ISOLATE AND INITIATE SHUT-DOWN PROTOCOLS FOR THE SYSTEM. NO EXCEPTIONS.” Would you like to proceed, User? ~28ms

USER: ok well i have math homework which i bet an ai could solve so yeah lets do this