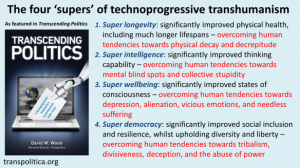 Chapter 1. "Vision and roadmap" is the title of the first Chapter in the book Transcending Politics by David Wood.

"There is no escape: the journey to a healthier society inevitably involves politics."

The necessity of politics

"There's no intrinsic reason for politics to be messy or ugly, raucous or uncouth. Nor should it be seen as some kind of unnecessary activity. Politics arises wherever people gather together. Whenever we collectively decide the constraints we put on each other’s freedom, we’re taking part in politics."

The necessity of transhumanism

"Power tends to corrupt, warned Lord Acton, the nineteenth century historian and politician. Absolute power corrupts absolutely.[1] Power can corrupt the clarity of our thinking, and our sense of moral duty. It can lead us to forget our social binds to our fellow citizens."

"It’s time to talk frankly about technology. Technology is eating the world[2], at an accelerating pace. Technology is changing everything, but not necessarily for the better. We’ve been embracing new powers with insufficient forethought. Like the animated broom in Goethe’s fable of the sorcerer's apprentice, technology initially promises so much, but has the potential to unleash floods of damage."

"The future of politics is intimately tied up with the future of technology. We cannot hope to free politics from the destructive pressures it faces – ..."

This book sets out such a vision. I call it the Transpolitica vision.

"The French philosopher Joseph der Maistre may have overstated matters when he wrote in 1811 that[3] “Every nation gets the government it deserves”, but there's more than a gist of truth in the saying... The Transpolitica road map for better politics involves accordingly, the following ingredients:..."

"The Transpolitica vision of “transcending politics” does not foresee the abolition or eradication of politics. There's nothing intrinsically undesirable about the central purpose of politics - the process whereby collective decisions are taken on the constraints we put on each other's freedom."

Technocracy and its limits

"There's a long history to the idea that political decision should be taken, not in the basis of ideology (such as left-wing or right-wing), nor on the basis of party loyalty, but on the basis of independent rational thinking, empirical evidence, and scientific methods."