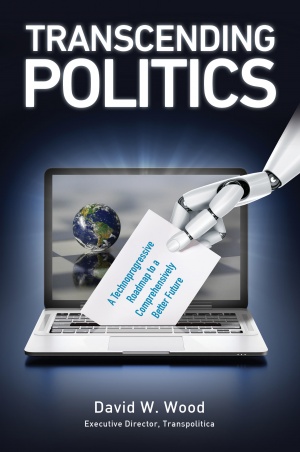 Chapter 12. "Humans and superhumans" is the title of the twelfth Chapter in the book Transcending Politics by David Wood.

In this chapter, I’ll look at four different answers to this question:

We humans are sometimes angelic, yet sometimes diabolic.

The new human in history

For as long as history has been recorded, humans have been turning over a new leaves in their lives. as a result of a dramatic personal experience - perhaps involving a shock or disappointment, or seeing the inspiring example of someone else, or finding a novel way of looking at the world - people have set aside former habits an attitudes.

A healthy open society depends on elements - journalists and other researchers - that determinedly seek out evidence of the actual impact of government policies. It does not rely simply on official accounts.

Do utopian experiments always turn out bad? What is the right conclusion to draw from the dreadful examples of the Khmer Rouge in Cambodia, Maoist experimentation in China, and the Bolshevik revolution in the Soviet Union?

Page 329 reads, Under the primary authorship of Max More, the statement of Extropian principles evolved over the years, culminating in 2003 in version 3.11.

The technoprogressive transformation of society and human nature that I envisioned will build upon the important insights of the extropian principles.

Page 331 reads, "Accordingly, let's now take a moment to explore features of the human character that there's a strong case to seek to improve. Then we can move on to consider potential ways to carry out such improvements.

The character features I'm aiming to list are those which, if they are not tamed, threaten to combine in devastating ways with the greater powers that technology as a whole is putting in our hands.

One criticism of the initiative I've just outline is that it puts matters the wrong way round.

I've been describing how individuals can, with the aid of technology as well as traditional methods, raise themselves above their latent character flaws, and can therefore make better contributions to the political process (either as voters or as actual politicians) In other words, we'll get better politics as a result of getting better people.

... was the fruit of an open collaborative process. The first published version dates from July 1998.[1]

One of the most important developments within the overall transhumanist community, in the last few years, has been the growth of workshops and summits dedicated to "biohacking".

One complaint made by reviewers of the book Stealing Fire is that several of the recommendations it contains fall foul of local or national laws. The rich, powerful, and resourceful people covered in the book have their own means of acquiring the smart drugs championed by the authors. But many readers aren't in such a position.

Underlying much of the legislative opposition to transhumanist technologies, such a smart drugs, is the philosophical viewpoint that claims there's a fundamental distinction between “therapies” and “enhancement”: