One of the goals was to identify common grounds between transhumanists who are often passionate about the extent of the role of state involvement in emerging technologies.

Another was to deconstuct the many dystopian scenarios that have been depicted in film and TV, often giving people technology anxiety about oppressive use of future technologies. 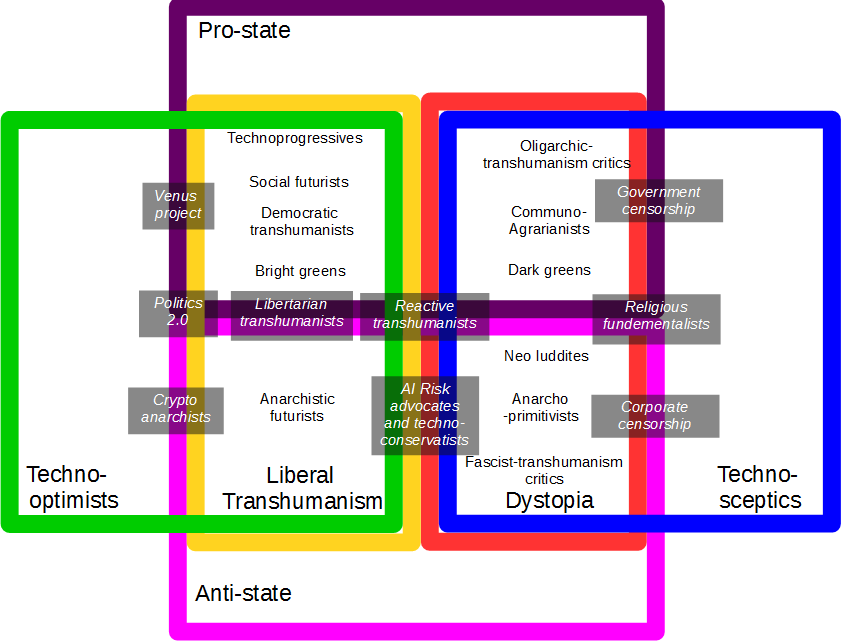 I was tempted to add Idiocracy but resisted the urge. :(

Attempting to explore so many political positions in such a complex way was inevitably going to be controversial. In conversations with committed technolibertarian Mike Lorrey, a number of differing views were raised.

The possibility of a dystopian scenario caused by run away (or not 'true' libertarian) libertarian transhumanism heading into oligarchic transhumanism was dismissed as not a possible outcome. I disagreed on this point, given the popular perception many people have that libertarian-enabled free market capitalism could lead to such a dystopian future. The small differences I wrote up in dystopian transhumanism illustrate that there are subtle differences in this area depending on where one's values lie. A progressive or left wing person sees a future world with vast inequality as dystopian, where as a libertarian or right wing person sees the power of the state necessary to administer this equality as dystopian.