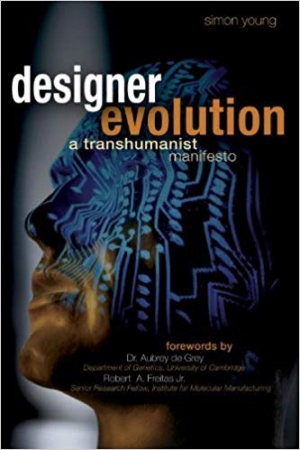 First Published in 2005 by Prometheus Books

Designer Evolution: A Transhumanist Manifesto is a book by Simon Young.

"In Designer Evolution Simon Young presents a polemical espousal of transhumanist philosophy and a trenchant attack on its critics, the "Bio-Luddites." The author calls for a rejection of premodern superstition and postmodern nihilism in favor of a renewed belief in human progress through scientific rationality. In an age when cynicism, fatalism, and nihilism are rife, Designer Evolution will rekindle a feeling of optimism about the future of our species. This is a concise, reader-friendly introduction to a vitally important philosophy that will become difficult to ignore as advances in biotechnology increasingly claim the headlines in the coming decades."- From the book summary at Amazon.com[1]

Simon Young is also an English composer-pianist of Romantic Minimalism and Technoromanticism. "Hugely talented both as a pianist and a creative force." -David Charles Abell, U.S conductor[2]