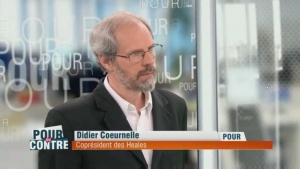 Didier Coeurnelle is Vice President of AFT-Technoprog. He is also co-chair of Heales (Healthy Life Extension Society), an association that promotes a much longer life in good health. He is member of the board of Humanity+. The association organizes international conferences and publishes a monthly newsletter ("The death of death"). He is a social activist working to promote equality and solidarity at all levels. For more than thirty years, he has been an active member of Belgian environmental movements (Ecolo and Groen).[1]

In October 2018 he was elected to the Board of Directors for Humanity+. He is also one of the main organizers of the Eurosymposium on Healthy Ageing, and co-organized the Longevity Film Competition.

The Fifth SENS conference. Longevity as a catalyst of non-violence. A longer and healthier life is a good thing for individuals, but it is also positive for the whole society. This speech will give a quick description of positive political, economical and sociological aspects of a world with a largely delayed senescence: lower health costs, lower level of violence, higher level of happiness...[4]