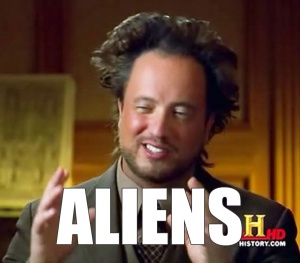 Extraterrestrials (also commonly called aliens) are hypothetical lifeforms that originate outside of Earth (the name derives from the Latin Terra, referring to the Earth). The arguments for their existence tend to be based on the fact that the Earth and it's life exists, and that it's therefore possible that life could occur elsewhere. One such theoretical equation considering the possibility of external life is the Drake Equation.

Some believe[citation needed] that potential alien encounters could pose a great risk to humanity, and therefore see attempts to discover and communicate with extraterrestrials, such as the SETI project, as dangerous. The reasoning is that any extraterrestrial capable of reaching us undetected would significantly surpass our current technology, and put us at whims of our alien visitors.

Edward Snowden has suggested that aliens may be encrypting and obscurcating their communications for their own safety, explaing why we've not met them yet.[1]