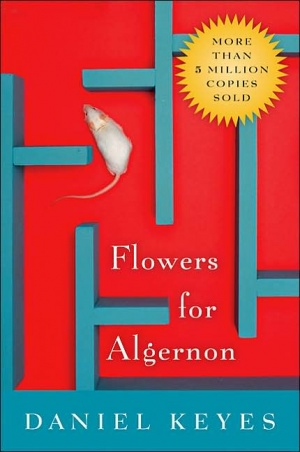 Flowers for Algernon is a science fiction novel written by Daniel Keyes. It was also adapted into a Film in 1968 titled "Charly".

Although it is a science fiction novel, you're not going to be reading about any laser guns, photon cannons, cyborgs or anything else apart from the enhancing of intelligence and it's potential pitfalls. The book starts with a Charlie Gordon "progris riport", he is a 32 year old who attends a college for slow adults. The book is written in the manner Charlie Gordon talks.

Algernon is a mouse who has remarkable ability at solving the "amazed" (maze), this is after the mouse has had its intelligence raised via a medical procedure. Charlie and Algernon both race each other and Charlie keeps getting beaten by him. All the "expiruments" that Charlie has been doing, such as reading ink blots and telling the doctor; "someone spilled ink" and doing the mazes with Algernon are all to test his base level before an operation to improve Charlie's intelligence.

The main transhumanist element throughout the book is that of Gordon's more enhanced intelligence and the problems it poses for him. Charlie makes his first "PROGRESS REPORT" hinting that the operation has been a success. His intelligence slowly begins to build throughout the book, first his writing improves and he beats Algernon at the maze, then his memories begin to make more sense. He realises that some of his "friends" who he used to think were having a laugh with him, were actually sometimes laughing at him. As his intellect improves he becomes too smart for his bakery job, and later even surpasses the professors and doctors that helped to make him smart in their respective fields. Alienation becomes a key topic in both his professional and personal lives.

One of the most interesting paragraphs from the book, from a research and funding perspective is this;

"But there were other kinds of papers too P. T. Zellerman's study on the difference in the length of time it took white rats to learn a maze when the corners were curved rather than angular, or Worfel's paper on the effect of intelligence level on the reaction-time of rhesus monkeys. Papers like these made me angry. Money, time, and energy squandered on the detailed analysis of the trivial. Burt was right when he praised Nemur and Strauss for devoting themselves to something important and uncertain rather than to something insignificant and safe."

This is something that is often brought up with regards to aging, longevity, and other areas of research and funding.

Another interesting point of note in regards to attitudes is when Charlie visits a home. This is a place he will most likely end up in if his intelligence should return to its previous level, or perhaps worsen. Charlie mentions science helping the other residents of the home to both a woman and a man at the facility, they have little response to his ideas saying words to the effect of; science couldn't help them and that all hope was lost for these people.

The word Algernon may refer to; "Any human who, via artificial or natural means, has some type of mental enhancement which carries a price." [1]