From H+Pedia
Jump to navigation Jump to search
Closer to the Truth - Is Mathematics Eternal? Mathematics is like nothing else. The truths of math seem to be unrelated to anything else—independent of human beings, independent of the universe. [1] 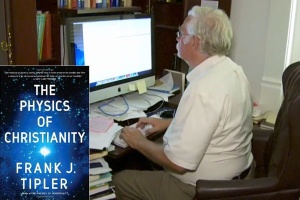 Tipler at his desk

Frank J. Tipler is Professor of Mathematical Physics at Tulane University. He is the co-author of (with John Barrow) The Anthropic Cosmological Principle, about the significance of intelligent life in the universe, and the author of The Physics of Immortality about the ultimate limits of computers, and the role computers will play in the universe, and The Physics of Christianity, about his scientific reserach into central Christian claims and beliefs.[2]

"The Omega Point Theory is both a physical theory of cosmology, and a proposal for the future of life in this universe.

I recently interviewed Tipler on the scientific, philosophical, and theological ramifications of his theory. Today, I’ll simply look at the proposal itself.

What would it take for life to survive all the way to the end of time?

But if we do leave the planet, we can carry life with us. All the species of plants and animals, ecosystems and living organisms, both currently living, and long extinct, can be brought back to life to flourish on new worlds.

With a supercomputer, the nano-machines we should have in a few years, and a virtual ‘Noah’s Ark’ of DNA sequences, we should be able to construct a lightweight spacecraft that can venture to other star systems, and seed new living worlds. And it should be able to do this at a substantial fraction of the speed of light.