From H+Pedia
Jump to navigation Jump to search
Is Futurama the Best Argument Against Transhumanism?

The series premiered in 1999 and ran until 2003 in its first run. After switching to Comedy Central from Fox in the US, the series aired again starting in 2008 and running until 2013.

In 1999 he was a pizza delivery guy, so when he re-awakens in the future he becomes a delivery guy once again, but this time for his distant relatives delivery company named "Planet Express".

And one of their recurring side or main plots within show is have completion against Megacorporation named Momcorp (with illegal subsidiary Momsanto as seen in second run of series) own by 'Mom' (also creator of Bender along majority of other Earth's robots and One of main antangonists) who want find ways to keep herself alive as means keep her fiscal empire afloat and show driving force for Transhuman side. 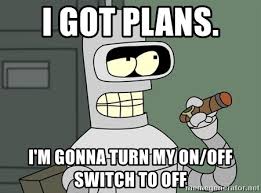 Cryopreservation is the key plot point behind the story, but the series also features many other transhumanist elements such as; genetic engineering, body modifications and various others. The transhumanist elements in Futurama are often treated either positively or negatively, and quite often a combination of both.

A PBS short looks at the non-transhumanist perspective of Futurama and its portrayal of the ever presence of suffering,[1] to which David Pearce agrees Futurama is "futurist not transhumanist"[2]