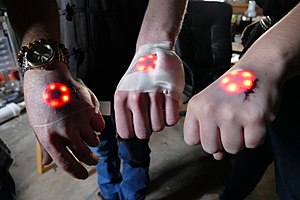 The Northstar device beneath the skin shortly after implantation.

Grindhouse Wetware is an organization focused on experimenting with technology to augment human capabilities. The company is most well known for their Circadia device, a wireless biometric sensor that was implanted into co-founder Tim Cannon in October 2013.[1] Grindhouse has been featured in television shows such as The Big Picture with Kal Penn[2] and Taboo on the National Geographic Channel,[3] Joe Rogan Questions Everything on Syfy,[4] as well as podcasts including Ryan O'Shea's Future Grind[5] and Remarkably Human.[6]

In November 2015, Grindhouse members Tim Cannon, Shawn Sarver, Justin Worst, Jessica Waldrip, Michael Seeler, and Marlo Webber had prototypes of Grindhouse's Northstar device implanted into during simultaneous procedures occurring at the "Cyborg Fair" in Düsseldorf, Germany and at a studio in Pittsburgh. The implantation procedure was featured in an episode of the MTV documentary series True Life. Also featured in the episode was the public debut of the morse code functionality of Grindhouse's Bottlenose device at the first Pittsburgh Maker Faire.[7]

Due to the lack of a clear path to market for augmentative implanted technology for humans, a spin-off company known as Livestock Labs was formed to bring Grindhouse Wetware technology to market for cattle.[8] Their product, known as EmbediVet, is an implantable health tracker for livestock.[9]