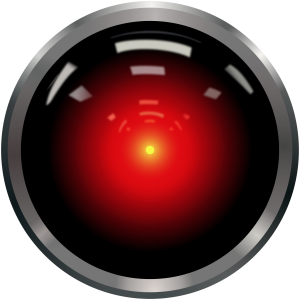 HAL, or HAL 9000, is an abbreviation for Heuristically programmed ALgorithmic computer—also said to have been named after IBM, with each letter moved one place prior to that of the corporate computer manufacturer that served as real-life counterpart and inspiration. HAL is a fictional homicidal sentient computer and artificial intelligence, and the primary antagonist in Arthur C. Clarke's Space Odyssey series. HAL was most notably portrayed as soft-spoken and polite, yet homicidal, computer onboard the spaceship Discovery One that controlled the ship and interacted with its astronauts in the film 2001: A Space Odyssey, which has held a lasting cultural impact on American society. HAL is oft-cited as an example in the context of the possible dangers of runaway technology, one of the existential risks of Artificial General Intelligence.