This is a project aimed at producing a set of detailed designs for a hybrid bio/synthetic human body. It's not an attempt to create such a body, more a way of preparing for the time when we do have the ability to create one, so that we have clear paths and sub-goals, and so that we can chart progress towards that ultimate aim.

It is divided into a general concept (see the Basic Design Concept sections, below), twelve main Topics that describe the various things that will be required to build this kind of body, and a number of subsidiary areas linked to the various topics. There is also a 'Possibilities' page for speculation about what forms these bodies could take, what they miight look like, what they might make possible, and a 'Sandbox' page to allow contributors who are new to wiki editing to practice without worrying about messing things up.

The driving force behind this project is the fact that our current bodies are simply not good enough. While they are the marvellous and intricate results of hundreds of millions of years of evolution, they are also fragile, short-lived, full of design faults and prone to a very large number of failure modes. They are also the cause of a massive amount of human suffering, lost potential, and premature death. They are simply not fit for our purposes as intelligent, self-aware beings who have started to value their minds above their genes.

There is an alternative.

Instead of just accepting the flawed bodies that evolution has given us, we can begin to actively design better ones. A major disadvantage of our current bodies is that they are not maintainable over the long-term. Once they begin to fail, there is no easy way to remove and replace faulty and worn-out parts. If some of your vertebrae get damaged or worn, for example, there's not much that can be done. They certainly can't be just whipped out and new ones put in. The question is: Why not? Or, rather, how could we make this possible?

One of the big differences between, say, a car and a human body is that you can easily remove a part from a car and replace it with another part without having to damage the car. Suppose that the human body could be designed from the ground up to be more like a car, in the sense of being able to remove and replace faulty parts without major trauma? Diseased and damaged tissues and organs could be swapped for healthy ones (assuming replacements were available, which is a separate matter) without surgery, without pain, quickly, safely and without any need for a healing process afterward.

How might this be possible? The key lies in the concept of modularisation, and the ability to create hybrid bio/synthetic structures.

Imagine a non-living 'chassis' consisting of a synthetic skeleton, ligaments and tendons, together with a network of 'core services' that includes the major blood and lymph vessels contained in, and protected by, flexible synthetic pipes, plus a communication network (in place of the peripheral nervous system), with all the living biological components – organs, muscles, etc. – contained in sealed modules that slot into place and fasten to the chassis. Each module would be attached to the core services network via a standard interface that combines blood, lymph and nerve connections in a single unit that is easy to unplug from the module. The interfaces would incorporate valves so that fluids were not lost when unplugging them, much like domestic radiators can be detached from a central heating system without getting water all over the place.

This approach would mean that any disease or damage to the organs could be quickly and effectively dealt with (i.e. eliminated entirely) by replacing the affected parts with new, healthy ones, just like you would remove and replace a faulty or worn-out air filter in a car. There would be no danger of infection during the process because the biological part would be safely inside its module the whole time, so bacteria, viruses etc., would have no access to any living tissue, even when the body was wide open to the outside world. The entire organ module would be removed and replaced, and all the modules would be located in suitable compartments in the non-biological superstructure, which could be as dirty as you like without any concern, much like the engine compartment of a car can be dirty and oily without affecting the internal spaces of the engine. It would probably be advisable (and easy) to disinfect this non-biological superstructure, though, just to be on the safe side. There would be no concern about damaging delicate biologial tissues, so very effective sterilisation methods could be used, such as strong acids or alkalis, oxidising agents, UV light, etc. The superstructure could even be an intrinsically hostile environment for living organisms so that accidental damage to the organ compartments would not expose them to immediate contamination.

If someone developed emphysema, for example, which is currently a serious and often fatal disease, we could unfasten and remove their lungs without having to cut their body open (via a standard access point which can be opened and closed without causing any damage). Temporarily hook the body up to an oxygenation system while a new set of lungs is put in and connected to the internal interfaces, then remove the external supply, and Voila! emphysema cured in 10 minutes.

From the outside, all this could look as much (or as little) like a normal human body as desired. Initially, of course, the look would be secondary to getting the whole idea working, so the first examples would probably be very unlike a normal human body, but this would soon change, as we gain experience and expertise in building these new bodies, and as new relevant technology develops.

As time goes by, and the various technologies that relate to this project come into being, it will be extremely important that individuals' ownership and control of their own bodies is assured. If anyone has seen the film 'Repo Men', they will understand this, at least in part.

At the moment, almost all of the technology that we use is subject to 'corporate capture': the technology is owned or controlled, or both, by the supplier and not the user. Now fast-forward a couple of decades and imagine having a hi-tech liver that is leased from, and controlled by, some multinational corporation.

It's one thing to have your documents become temporarily unavailable because some algorithm has misinterpreted the company's 'terms of use' rules. It's quite another for your life to be terminated because of a similar mistake. Human bodies and body parts must not be subject to copyright, DRM, or any other kind of external control or ownership. See Legal Issues for more details.

So the intention is to start as we mean to go on, and all of the content in these project pages is in the 'Public Domain', falling under the Creative Commons licence CC0 1.0 (No Copyright): https://creativecommons.org/publicdomain/zero/1.0/

This means that anyone may copy, modify, and distribute the information in this project without seeking permission, without restrictions and without attribution.

(Note that this is a slightly different CC licence to that applying to the main H+Pedia site (CC0 4.0), as attribution is not required). 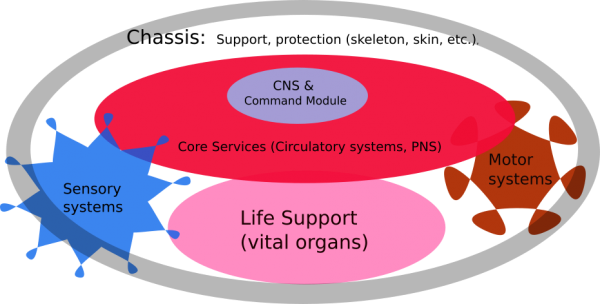 The Core Services are the main vascular and peripheral nervous networks, the lymphatic vessels and power lines. These run throughout the entire body.

Life-support ('vital organs'), Sensory systems and Motor systems (either muscles or a synthetic equivalent) occupy the various compartments, and are, for the most part, contained in individual modules. Each module has a standardised interface to the Core Services. These interfaces contain valves and electrical/optronic connections, designed for easy disconnection and reconnection, so that an organ module, for example, can be detached and removed without any damage or loss of blood or lymph, and without any pain. Each module also has mechanical connections to the chassis that are easily unfastened and re-fastened, and an access path to the outside. This means that any module can quickly and painlessly be removed and replaced without any damage to itself or to the body as a whole.

The Command Module contains the Central Nervous System (CNS - brain and spinal cord), together with neural interfaces that connect all the afferent (sensory) and efferent (motor) nerves to a computerised system that runs a 'Virtual Body'. This connects to the communications network in the Core Services, and allows for complete control of all bodily sensations and motor functions. It also allows the CNS to connect to external communications, and virtual reality systems, so that Augmented Reality, the ability to enter full-immersion virtual worlds and immediate connection to any communication networks such as the internet, are all built right into the system.

Obviously there are several challenges that need to be solved before a design like this can be realised. Not least are the issues of where are the new body parts going to come from? How do we ensure they will not be rejected by the Immune System? How might someone Transition from their original body to one of these new bodies? And a few other, less-obvious questions.

There are five essential elements needed to realise this idea:

Use the Project Pages Navigation Menu at the top of this page to find the various Topic pages.

Another, inevitable question at this point is "OK, but what does this body actually look like?"

The only sensible answer is "Whatever you want it to look like (within reason)".

A natural assumption is that these bodies will be designed to look much like we do now. But there's no reason you couldn't build a centaur body, a mermaid, a griffin, etc., to take some themes from mythology, or something completely different. A giant bug, a squid on rollerskates, whatever you like as long as it's physically possible. But any number of minor variations on the human form would be very easy to achieve (e.g. the blue Pandorans from the film 'Avatar'). See the Possibilities page for more ideas.

This project is split into a number of 'Topic' pages, a 'Possibilites' page and a 'Sandbox'.

The Topic pages all have the same layout:

At the top of each page is an Introduction explaining what the topic is and how it fits into the project as a whole. This may contain a 'Roadmap' section showing sequential and/or alternative stages, if the topic requires it. Then there are four page sections:

Topic pages have links to subsidiary pages to deal with more detail where needed (e.g. the "Modules" page has links to individual Organ Module pages such as Liver, Spleen, Lungs, etc.)

The Possibilities page is to expand on what these bodies might look like, what they could be capable of and what further possibilities will could open up.

The Sandbox is a practice area for people new to wiki editing.

Use the menu at the top of this page to navigate to these Project Pages.

Note: While there may be a superficial similarity to the 'Primo Posthuman' concept, the Human Body 2.0 project is very different, being aimed at working out the practical details of the design and implementation of a hybrid bio/synthetic body, specifically centred around the concept of easy maintenance achieved through an integration of biological and synthetic systems and materials. The intention is to be as specific as possible about the various features mentioned and the paths leading to them, in order to produce a comprehensive and practical design. This means that it is unavoidably a very big, very technical, and long-term project.