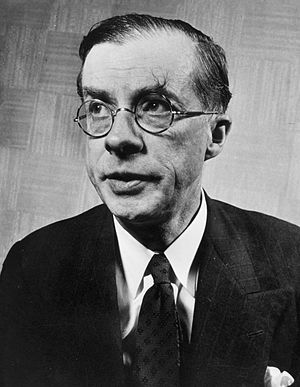 Julian Huxley (1887–1975) was a British evolutionary biologist and humanist who in 1951 coined the term "transhumanism" as the name of a proposed new philosophy:[1]

Never was there a greater need for a large perspective, in which we might discern the outlines of a general and continuing belief beyond the disturbance and chaos of the present...

Every society, in every age, needs some system of beliefs, including a basic attitude to life, an organized set of ideas around which emotion and purpose may gather, and a conception of human destiny. It needs a philosophy and a faith to achieve a guide to orderly living - in other words, a morality...

This brings me... to the emergent idea-system, the new organization of thought, at whose birth we are assisting. It takes account, first and foremost, of the fact that nature is one universal process of evolution, self-developing and self-transforming, and it includes us. Man does not stand over against nature; he is part of it. We men are that part of the process which has become self-conscious, and it is our duty and our destiny to facilitate the process by leading it on to new levels.

Our chief motive, therefore, will derive from the exploration and understanding of human nature and the possibilities of development and fulfilment inherent in it, a study which will of course include the limitations, distortions, and frustrations to be avoided.

Such a philosophy might perhaps best be called Transhumanism. It is based on the idea of humanity attempting to overcome its limitations and arrive at fuller fruition; it is the realization that both individual and social development are processes of self-transformation.

(Note: some writers give the date 1927 as when Huxley first used the term "transhumanism", and refer to his 1927 publication "Religion without revelation". However, copies of that publication do not contain the word "transhumanism".)

Huxley was also the brother of Aldous Huxley, author of Brave New World.[2][3][4]

The relation between the thought of Julian Huxley, eugenics, and twenty first century transhumanism, is explored in a 16-page essay by historian Alison Bashford[5].