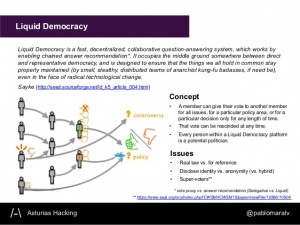 Liquid democracy is a technologically enabled and scalable hybrid of direct and representative democracy.[2] Liquid Democracy, a subset of Delegative Democracy, is a powerful voting model for collective decision making in large communities. Liquid Democracy combines the advantages of Direct Democracy and Representative Democracy and creates a truly democratic voting system that empowers voters to either vote on issues directly, or to delegate ones voting power to a trusted party.[3]

"Superdemocracy upholds the concept of delegated voting, via systems such as “liquid democracy”. This enables citizens to delegate their votes in specified areas of debate to people whom they trust in these areas. In case someone changes their mind, delegations can be revoked or reassigned at any time.
Liquid democracy is a tech-enabled improvement to those parliamentary systems in which a single elected member of parliament is meant to represent the voter in all areas of debate. With liquid democracy, representation is no longer an all-or-nothing affair. Accordingly, liquid democracy moves away from the unhelpful fiction that politicians are supposed to have been elected to carry out every nook and cranny of their election manifesto. It enables a set of approvals and affirmations that is much more fine-grained - an ongoing dynamic conversation with nuance and inventiveness."