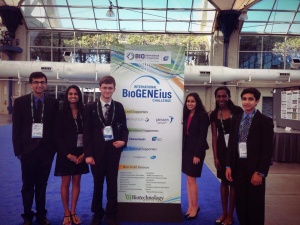 Logan and friends at the International BioGENEius Challenge

Logan Thrasher Collins is a futurist, synthetic biologist, and inventor currently attending Washington University in St. Louis as a PhD student in biomedical engineering. He is also the lead scientist at Conduit Computing [1].

Logan is a founder and admin for the Facebook group Technical Transhumanism (over 1000 members as of January, 2021). On September 28th, 2018 he created the Facebook group, Neural circuits: computational, molecular, and anatomical approaches (over 5000 members as of January 2021). He was an attendee at the 2017, 2018, and 2019 Princeton Envision Conference.

"At the inaugural DaVinci Institute [1] Speaker's Series event, Logan Thrasher Collins makes the case that there is a tremendous amount of fertile ground at the interface between aesthetics and science. Though science is meant to be an unbiased and dispassionate enterprise, the ways in which grand scientific undertakings are conceived, justified, pursued, and communicated are often mytho-poetic in nature -- note that many of the great rockets are named for Greek and Roman gods."[2]