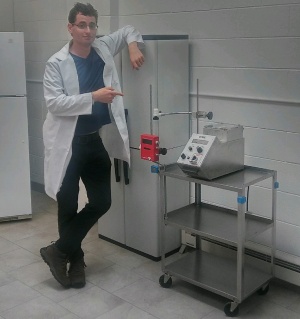 Matthew Deutsch standing next to an experimental peristaltic perfusion pump.

Matthew Bryce Deutsch (born 1995) is a transhumanist and cryonics advocate who is currently a student at the University of Delaware. He is the manager of the Facebook memes page Cryonics Hematocritposting ("hematocritposting" being a play on the term "shitposting"). He became enthusiastic about cryonics after attending the 2011 Singularity Summit at age of 16. Motherboard subsequently featured him in video entitled Teen Plans to Cheat Death by Freezing his Brain. He assisted with the successful cryogenic preservation of his mother, Linda Deutsch, which occurred on March 14, 2018 under supervision from a perfusion technician from the Cryonics Institute.[1] He has also had two of his dogs cryopreserved.[2] He has personally adapted Nicholas Reef Van Der Mullen screenplay The Case Report of Amber Sky into a musical. He has also developed the card game Cryonics Against Humanity.