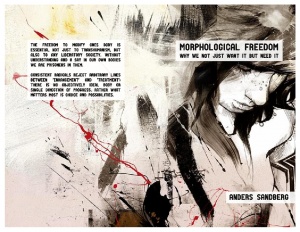 Morphological Freedom is a complex civil rights issue focused on the decision to modify one's own body, as one sees fit.[1]

"For transhumanists, there are a couple of conditions to ensure the “freedom” part of the term.

First, there can be no coercion. The person having their body altered must do it of their own volition. This includes the artist / surgeon / technician conducting the procedure. Also, a third party should not be harmed because of the alteration.

The second component of morphological freedom is privacy. If the above conditions are met, what a person chooses to do with their body is no one else’s business. It doesn’t matter if someone thinks the person looks “strange” or “weird.” One person’s religion or philosophical worldview has no bearing on how another person chooses to look. Humans should be free to change their appearance to what pleases them most." - Medium.com WIRE HEAD Article by Alex Hamilton[2]

Article 3. Human beings, sentient artificial intelligences, cyborgs and other advanced sapient life forms agree to uphold morphological freedom – the right to do with one's physical attributes or intelligence (dead, alive, conscious, or unconscious) whatever one wants so long as it doesn't hurt anyone else.[3]

Article X. Sentient entities agree to uphold morphological freedom—the right to do with one’s physical attributes or intelligence whatever one wants so long as it does not harm others.

This right includes the prerogative for a sentient intelligence to set forth in advance provisions for how to handle its physical manifestation, should that intelligence enter into a vegetative, unconscious, or similarly inactive state, notwithstanding any legal definition of death. For instance, a cryonics patient has the right to determine in advance that the patient’s body shall be cryopreserved and kept under specified conditions, in spite of any legal definition of death that might apply to that patient under cryopreservation.

Morphological freedom entails the duty to treat all sapients as individuals instead of categorizing them into arbitrary subgroups or demographics, including as yet undefined subcategorizations that may arise as sapience evolves.

However, the proper exercise of morphological freedom must also ensure that any improvement of the self should not result in involuntary harms inflicted upon others. Furthermore, any sentient entity is also recognized to have the freedom not to modify itself without being subject to negative political repercussions, which include but are not limited to legal and/or socio-economic repercussions.[4]

- Version 2.0 developed by members of the U.S. Transhumanist Party – Adopted via Electronic Vote on December 25-31, 2016 – Integrated from Voting Preferences on January 4, 2017