Noogenesis is the emergence and evolution of intelligence.[1][2][3][4]

In 1871 by medical doctor Hugh Doherty in the part "Noogenesis" of the book "Organic Philosophy" was first mentioned "noogenesis": "The growth of the mind in the human race keeps pace with the gradual evolution of the sciences, and is easily traced in history, while the origin of mental faculties and their gradual evolution in the individual mind is a vexed question of psychology... We cannot trace the formation of an experimental mind in utero, as we can trace the formation of the body, but biological unity involves mental as well as physical faculties in the newborn child... The experiential faculties of mind are more or less exercised in all the sciences, as the organs of the body in all physical vocation; but, like these organs, they must be formed in utero before they can be developed in adult life. Instictual vocations are limited to experience and work on the surface of the globe, while the mind investigates all the depts of nature in the universe, bounded only by infinity... What is the fixed cycle of sociogenetic evolution for the collective organism of humanity, compared with that of individual embryogenesis?.."[8].

In 1955 by anthropologist and philosopher Pierre Teilhard de Chardin in the book The Phenomenon of Man mentioned "noogenesis" in a few places: "With and within the crisis of reflection, the next term in the series manifests itself. Psychogenesis has led to man. Now it effaces itself, relieved or absorbed by another and a higher function—the engendering and subsequent development of the mind, in one word noogenesis. When for the first time in a living creature instinct perceived itself in its own mirror, the whole world took a pace forward."[9] "There is only one way in which our minds can integrate into a coherent picture of noogenesis these two essential properties of the autonomous centre of all centres, and that is to resume and complement our Principle of Emergence."[10] "The idea is that of noogenesis ascending irreversibly towards Omega through the strictly limited cycle of a geogenesis."[11] "To make room for thought in the world, I have needed to ' interiorise ' matter : to imagine an energetics of the mind; to conceive a noogenesis rising upstream against the flow of entropy; to provide evolution with a direction, a line of advance and critical points..."[12] —"Omega point". The lack of any kind of definition of the term has led to a variety of interpretations reflected in the book,[13][14][15] including "the contemporary period of evolution on Earth, signified by transformation of biosphere onto the sphere of intelligence—noosphere",[16] "evolution run by human mind"[17] etc. The most widespread interpretation is thought to be "the emergence of mind, which follows geogenesis, biogenesis and anthropogenesis, forming a new sphere on Earth—noosphere".

Evolution of the reaction speed in the noogenesis. [18] In unicellular organism – the rate of movement of ions through the membrane ~ 10^{-10} m/s, water through the membrane 10^{-6} m/s, intracellular liquid (cytoplasm) 2 • 10^{-5} m/s; Inside multicellular organism – the speed of blood through the vessels ~0.05 m/s, the momentum along the nerve fibers ~100 m/s; In population (humanity) – communications: sound (voice and audio) ~300 m/s, quantum-electron ~ 3 • 10^{8} m/s (the speed of radio-electromagnetic waves, electric current, light, optical, tele-communications). 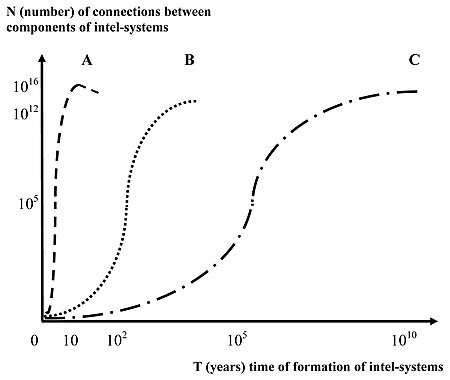 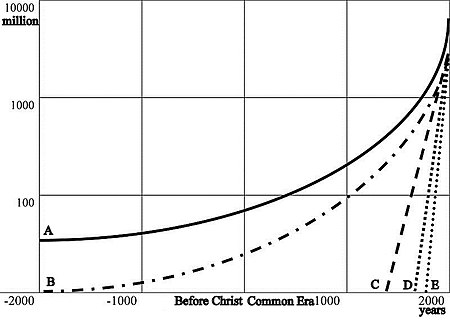 In 2005 Alexei Eryomin in the monograph "Noogenesis and Theory of Intellect"[19] proposed a new concept of noogenesis in understanding the evolution of intellectual systems,[21] concepts of intellectual systems, information logistics, information speed, intellectual energy, intellectual potential, consolidated into a theory of the intellect[22] which combines the biophysical parameters of intellectual energy—the amount of information, its acceleration (frequency, speed) and the distance it's being sent—into a formula.[23] According to the new concept—proposed hypothesis continue prognostic progressive evolution of the species Homo sapiens,[24] the analogy between the human brain with the enormous number of neural cells firing at the same time and a similarly functioning human society.[25]

A new understanding of the term "noogenesis" as an evolution of the intellect was proposed by A. Eryomin. A hypothesis based on recapitulation theory links the evolution of the human brain to the development of human civilization. The parallel between the number of people living on Earth and the number of neurons becomes more and more obvious leading us to viewing global intelligence as an analogy for human brain. All of the people living on this planet have undoubtedly inherited the amazing cultural treasures of the past, be it production, social and intellectual ones. We are genetically hardwired to be a sort of "live RAM" of the global intellectual system. Alexei Eryomin suggests that humanity is moving towards a unified self-contained informational and intellectual system. His research has shown the probability of Super Intellect realizing itself as Global Intelligence on Earth. We could get closer to understanding the most profound patterns and laws of the Universe if these kinds of research were given enough attention. Also, the resemblance between the individual human development and such of the whole human race has to be explored further if we are to face some of the threats of the future.[26]

Therefore, generalizing and summarizing: "Noogenesis—the expansion process in space and development in time (evolution) of intelligent systems (intelligent matter). Noogenesis represents a set of natural, interconnected, characterized by a certain temporal sequence of structural and functional transformations of the entire hierarchy and set of interacting among themselves on the basic structures and processes ranging from the formation and separation of the rational system to the present (the phylogenesis of the nervous systems of organisms; the evolution of humanity as autonomous intelligent systems) or death (in the course of ontogenesis of the human brain)".[27]

The term "noogenesis" can be used in a variety of fields i.e. medicine,[28][29] biophysics,[30] semiotics,[31] mathematics,[32] geology,[33] information technology,[34] psychology, theory of global evolution[35] etc. thus making it a truly cross-disciplinary one. In astrobiology noogenesis concerns the origin of intelligent life and more specifically technological civilizations capable of communicating with humans and or traveling to Earth.[36] The lack of evidence for the existence of such extraterrestrial life creates the Fermi paradox.[37]

Aspects of emergence and evolution of intelligence

To the parameters of the phenomenon "noo", "intellectus"

The emergence of the human mind is considered to be one of the five fundamental phenomenons of emergent evolution.[38] To understand the mind, it is necessary to determine how human thinking differs from other thinking beings. Such differences include the ability to generate calculations, to combine dissimilar concepts, to use mental symbols, and to think abstractly.[39] The knowledge of the phenomenon of intelligent systems—the emergence of reason (noogenesis) boils down to:

Several published works which do not employ the term "noogenesis", however, address some patterns in the emergence and functioning of the human intelligence: working memory capacity <math>\leqslant</math> 7,[40] ability to predict, prognosis,[41] hierarchical (6 layers neurons) system of information analysis,[42] consciousness,[43] memory,[44] generated and consumed information properties[45] etc. They also set the limits of several physiological aspects of human intelligence.[46] Сonception of emergence of insight.[47]

Evolution of speed of interaction between components of intelligence systems

The first person to measured the speed (in the range of 24.6 – 38.4 meters per second) at which the signal is carried along a nerve fibre in 1849 was Helmholtz.[48] [49] To date, the measured rates of nerve conduction velocity are 0,5 – 120 m/s. Speed of sound and speed of light were determined earlier in the XVII century. By the XXI century, it became clear that they determine mainly the speeds of physical signals-information carriers, between intelligent systems and their components: sound (voice and audio) ~300 m/s, quantum-electron ~ 3 • 10^{8} m/s (the speed of radio-electromagnetic waves, electric current, light, optical, tele-communications).

Evolution of components of intelligence systems

In 1906 year have received universal recognition neuron was opened by Santiago Ramón y Cajal, and the neuron doctrine is the concept that the nervous system is made up of discrete individual cells.[50] According to modern data, in the brain H. sapiens in the process of ontogenesis and phylogenesis of an adult human there are 86 billion neurons.[51]

Evolution of links between components of intelligence systems

Synapse – from the Greek synapsis (συνάψις), meaning "conjunction", in turn from συνάπτεὶν (συν ("together") and ἅπτειν ("to fasten")) – was introduced in 1897 by Charles Sherrington.[52] The relevance of measurments in this direction is confirmed by both modern comprehensive researches of cooperation, and connections of information, genetic, and cultural,[53] due to structures at the neuronal level of the brain,[54] and the importance of cooperation in the development of civilization. In this regard, Alexei Eryomin analyzed the known data on the evolution of the number of connections for cooperation in intelligent systems.[20] Connections, contacts between biological objects, can be considered to have appeared with a multicellularity of ~ 3-3.5 billion years ago.[55] The system of high — speed connections of specialized cells that transmit information using electrical signals, the nervous system, in the entire history of life appeared only in one major evolutionary branch: in multicellular animals (Metazoa) and appeared in the Ediacaran period (about 635-542 million years ago).[56] During evolution (phylogeny), the number of connections between neurons increased from one to ~ 7000 synoptic connections of each neuron with other neurons in the human brain. It has been estimated that the brain of a three-year-old child has about <math>10^{15}</math> of synapses (1 quadrillion). In individual development (ontogenesis), the number of synapses decreases with age to ~ 10^{14}.[57] According to other data, the estimated number of neocortical synapses in the male and female brains decreases during human life from ~ 1.4•10^{14} to ~ 1.2 • 10^{14}</math>.[58]

The number of human contacts is difficult to calculate, but the "Dunbar’s number" ~150 stable human connections with other people is fixed in science, the assumed cognitive limit of the number of people with whom it is possible to maintain stable social relations,[59] according to other authors - the range of 100–290. Structures responsible for social interaction have been identified in the brain.[60] With the appearance of Homo sapiens ~50-300 thousand years ago, the relevance of cooperation, its evolution in the human population, increased quantitatively. If 2000 years ago there were 0.1 billion people on Earth, 100 years ago - 1 billion, by the middle of the twentieth century – 3 billion,[19] and by now, humanity - 7.7 billion. Thus, the total number of "stable connections" between people, social relationships within the population, can be estimated by a number ~ 10^{12}." [20]

On the other hand, development of an individual's intellect deals with concepts of embryogenesis, ontogenesis,[66] morphogenesis, neurogenesis,[67] higher nervous function of I.P.Pavlov and his philosophy of mind.[68] Despite the fact that the morphofunctional maturity is usually reached by the age of 13, the definitive functioning of the brain structures is not complete until about 16–17 years of age.[69]

The joint global highly intelligent activity of people, mankind as an autonomous system, in the second half of the 20th century led to acts reflecting the unity of humanity, which in some cases reacts as an autonomous system. Examples of such unity are the founding of the UN and its specialized agencies, the victory over smallpox by vaccination, the atomic energy peaceful use, access into space, nuclear and bacteriological testing bans, and the satellite television arrangement.[19] Already in the 21st century - responding to global warming, hydrocarbon production contractual balancing, overcoming economic crises, mega-projects for joint space observations, the nanoworld study and nuclear research, the ambitions for the study of the brain[70] and the creation of universal artificial intelligence indicated in national and international[71] strategies. With a new challenge to humanity - the COVID-19 pandemic, in a hyperinformational society, the problem was designated as a choice "infopandemic or noogenesis?",[72] "the rise of a global collective intelligence".[73]

The future of intelligence

The fields of bioinformatics, genetic engineering, noopharmacology, intelligence amplification, cognitive load, brain stimulations, the efficient use of altered states of consciousness, use of non-human cognition, information technology (IT), artificial intelligence (AI) are all believed to be effective methods of intelligence advancement and may be the future of intelligence on earth and the galaxy.[26][74]