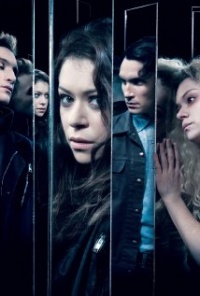 Orphan Black was a Sci-fi drama-thriller biopunk series that airs from 2013 to 2017, It consists of five seasons/series each having ten episodes. Individual episodes have a length between 40-45 minutes.

The series is available to view on Netflix (seasons 1 and 2) and Amazon Prime (season 1-3).

Months after show end, An Japanese remake named Orphan Black - 7 Genes[1] was announced and first air on December 2, 2017. Unlike it's Canadian/Western counterpart, It takes creative ways to change show dynamic includes tone down the Biopunk and even thriller elements in favoring more dramatic elements for its Japanese audience.

A number of characters belong to a community known as "Neolution", which states that it is a "human right" to be able to apply scientific knowledge to direct evolution. Some members of Neolution practice various degrees of body modification (for example, one of their members had a dog-like tail attached to his spine created from implying improved genetic engineering). The movement as a whole is particularly interested in genetic experiments, including human cloning.

Some other characters belong to a competing "Prolethean" community, with strong religious beliefs: they see genetic experimentation as an "abomination". Some Proletheans seek to destroy all human clones, whereas others are prepared to try to reuse that technology for their own purposes (which they view as divinely inspired).

Most characters belong to neither extreme and have to exist within a background of intrigue and conflict.

Other themes explored in the series include: