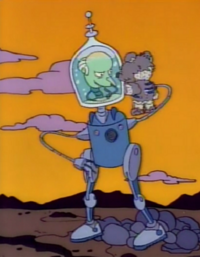 Transhumanist ideas are slowly making their way into popular culture beyond their staples of science fiction film and TV and various music videos:

I've been such a, a vocal champion of the singularity. But how can I leave my body behind and become one with the Internet when I've never even thrown a toothbrush away?[13]