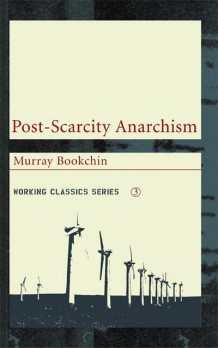 Post-Scarcity Anarchism is a book by Murray Bookchin.[1]

"In a series of related essays, Murray Bookchin balances his ecological and anarchist vision with the promising opportunities of a Post scarcity era. Surpassing Marxist political economy, which was rooted in an era of material scarcity, Bookchin argues that the tools necessary for the self-administration of society have largely been developed and, that, combined with an ecological outlook have greatly altered our revolutionary landscape... Bookchin's utopian vision, rooted in the realities of contemporary society, remains refreshingly pragmatic." — AK Press, Chico, California, USA[2]