The Transhumanist Party (UK) is considering its long term strategy towards marketing futurist ideas towards the general UK public.

The Party's name was initially inherited following Zoltan Istvan's US-based campaign and then partially adopted internationally including as a part of the now defunct Transhumanist Party Global.

One objection to the name 'Transhumanist Party' faced with outward facing campaigning is the lack of awareness of the terms transhumanist or transhumanism.

Another objection is that people who do know the word transhumanism tend to equate it with politically-naive techno-utopianism.

Additionally, there is desire to create a stronger intersection with traditional political currents such as technoprogressivism and libertarian transhumanism.

The Party wants to collect proposed alternative names for the party and break out the differing pros and cons associated with each.

Following the workshop, the Party made an announcement on its blog that it was inviting stakeholders to submit designs for a new brand identity of the Party.[2]

All designs submitted should involve four elements in total:

Once completed, all proposed solutions were requested to be uploaded, and links added to this H+Pedia page Proposed Transhumanist Party UK rebrand – no later than 21st August.

An online voting system between 21st – 28th Aug will reveal the most popular design.

By 30th Aug, the Party Leader will select the brand with the most votes as the new identity. Alternatively, they may combine 2 or more converging concepts into one.

The designs are requested to conform to the following core design guidelines that emerged from the sensemaking workshop.

Here are outline future goals for the Party:

For the next 1-2 years, the Party will primarily target and collaborate with Educators (i.e. Influencers), so that our impact is multiplied and maximised.

The Party has a predominantly ‘creative’ personality, made up of additional traits that include:

Back in 2016, the TPUK NEC underwent a formal brand analysis exercise with a volunteer who works professionally in the space.

One of the outputs was the following aggregated diagram about relationship of key values as seen by the NEC members collectively. 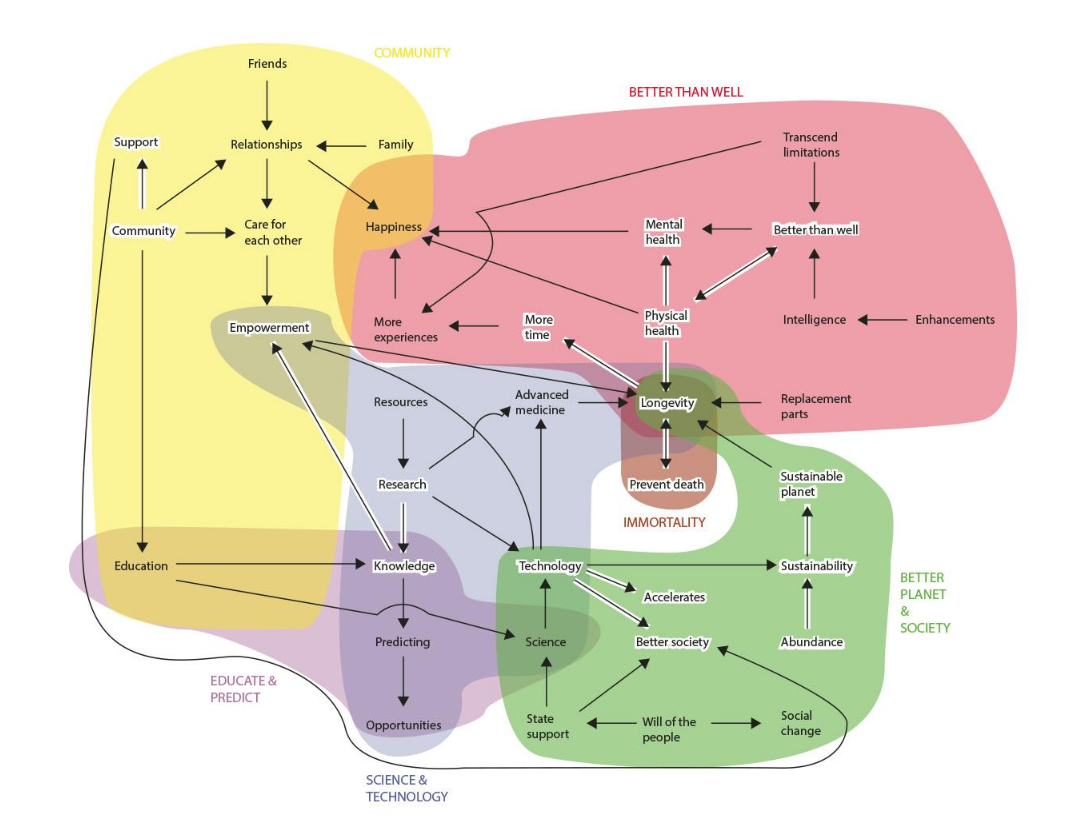 Here's a list of some allied international brands we should be aware of:

We need to consider once again whether we are building a 'big tent' transhumanist politics include all factions, or aligning with the major streams of technoprogressivism or libertarian transhumanism.

It's been suggested[4] that use of a narrower policy in the name could be effective e.g.

The prefix "trans" (as in "transhumanist") is subject to the issue that, for better or worse, it has been effectively appropriated by the transgender / LGBT community, to an extent that that other use of that prefix can cause confusion.

The prefix "techno" (as in "technoprogressive") is subject to the criticism that it implies a greater focus on technology than on science, medicine, etc. The party arguably needs to demonstrate an interest in all aspects of current and future society, not just technology.

The name Techno Progress starts with the core idea of 'Progress', and indicates the key role of technology in achieving that progress.

Colloquially, the party could be known as "the TPs" (akin to "the LibDems", "the Tories", and "the Greens").

The origin of this idea is the notion of "upwing" as opposed to "ring wing vs. left wing". But the word "upwing" may be too strange to serve as a party name.

The next phase of this idea is to express "upwing" as "progress". In principle, the party could simply be "the Progress Party". However, that omits the key role that technology plays in the party's policies.

The word "Progress" may be preferred to "Progressive" since:

This proposal can be compared with the Party for Health Research which was created in Germany in the first half of 2017 by a group of German transhumanists.[5]

The Party logo could feature an 'h' and a plus, combined in such a way so that:

Colloquially, the Party could be known as "the H+ Party".

Note: the term "health" is intended to include:

The "plus" is intended to imply:

The word Vitality has the same implications as "Health plus" (see above) but can be considered preferable because:

Some extracts from a recent review article about "Accelerationism"[6]

The world is changing at dizzying speed – but for some thinkers, not fast enough. Is accelerationism a dangerous idea or does it speak to our troubled times?

Accelerationists argue that technology, particularly computer technology, and capitalism, particularly the most aggressive, global variety, should be massively sped up and intensified – either because this is the best way forward for humanity, or because there is no alternative. Accelerationists favour automation. They favour the further merging of the digital and the human. They often favour the deregulation of business, and drastically scaled-back government. They believe that people should stop deluding themselves that economic and technological progress can be controlled. They often believe that social and political upheaval has a value in itself.

In our politically febrile times, the impatient, intemperate, possibly revolutionary ideas of accelerationism feel relevant, or at least intriguing, as never before. Benjamin Noys says: “Accelerationists always seem to have an answer. If capitalism is going fast, they say it needs to go faster. If capitalism hits a bump in the road, and slows down” – as it has since the 2008 financial crisis – “they say it needs to be kickstarted.” The disruptive US election campaign and manic presidency of Donald Trump, and his ultra-capitalist, anti-government policies, have been seen by an increasing number of observers – some alarmed, some delighted – as the first mainstream manifestation of an accelerationist politics. In recent years, Noys has noticed accelerationist ideas “resonating” and being “circulated” everywhere from pro-technology parts of the British left to wealthy libertarian and far-right circles in America. On alt-right blogs, Nick Land in particular has become a name to conjure with. Commenters have excitedly noted the connections between some of his ideas and the thinking of both the libertarian Silicon Valley billionaire Peter Thiel and Trump’s iconoclastic strategist Steve Bannon.

The name Advance has many of the good attributes of the "upwinger" notion of FM-2030 without straightaway provoking discussions of right-wing versus left-wing.