Quiness: Macroscopic quantum communications is a DARPA funded program established in 2012 and managed jointly by the Information Technology Office (ITO) and the Defense Sciences Office (DSO). The objective of the program is to acquire the necessary advances to enable the creation of a comprehensive global quantum communications network.[1]

Astronaut Development and Deployment of a Secure Quantum Space Channel 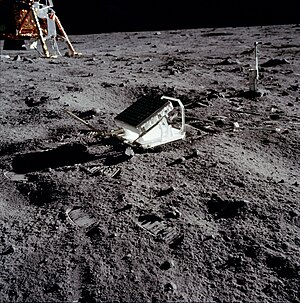 Lunar Laser Ranging Experiment with stereo camera in the background. Retroreflector left on the Moon by Apollo 11 astronauts

An international team of collaborators from the 2012 inaugural NASA Quantum Future Technologies Conference including Christopher Altman, Rupert Ursin, deputy director of Anton Zeilinger's University of Vienna quantum teleportation group, Paolo Villoresi, Colin Williams, Jeff Hunt and Vikram Sharma submitted an invited proposal to Quiness outlining a long-distance free-space quantum communications network from the Big Island of Hawai‘i to Maui, a change from the Canary Islands site that had been traditionally employed by the group to date,

Hawai‘i and its volcanoes offer the additional novel feature of an astronaut training facility on the volcano of Mauna Kea falling directly in the line-of-sight with joint Boeing–Air Force Maui Optical and Supercomputing observatory, a potential station for receiving coherent photon transmissions. The Pacific International Space Center for Exploration Systems, an international space agency initiative between NASA, the European Space Agency (ESA), and the Canadian Space Agency (CSA), acts as a remote operations site near the summit of Mauna Kea on the Big Island where next-generation space suit prototypes and lunar rovers, augmented reality interfaces, in-situ resource utilization and robotics field tests are used to train astronauts and test new prototypes for the next series of manned lunar and Mars missions.

The team's submission was the one of the only entries to meet the stringent bandwidth and coherence requirements of the program, yet the initiative went unanswered as US funding in quantum optics took an abrupt downturn, leading to a reversal of positions that continues to present-day.[9][10][11][12][13]

China has since taken the lead in accomplishing many historical firsts that would have been expected from the United States.[14][15][16][17][18]

Theoretical physicist and experienced DARPA and IARPA principal investigator Jonathan Dowling, early quantum technology pioneer and one of the founders of the US Government program in quantum information processing, discusses the circumstances behind the shift in Quantum Pundit: The Future Quantum Internet Will Have "Made In China" Stamped All Over It![19]

The photonic Quantum Computing in Condensed Matter (QCCM) initiative, led by American physicist Paul Kwiat, had collaborators that stretched from Austria with Anton Zeilinger to Australia with physicist Andrew Whit. We had what we all thought were great results; we submitted in 2010 a straightforward, essentially renewal proposal—but we were not funded, and neither was anybody else in photonic quantum computing.

The optical switches and transistors developed for the scalable optical classical computer found their way into the switches and routers and hubs for the fiber-optic-based classical Internet. The future Quantum Internet will also require the manipulations of photons at the quantum level—a quantum repeater is a device for transmitting quantum information over long distances. The quantum repeater is a small, special-purpose, optical, quantum computer that executes a particular error correction protocol. The future of the Quantum Internet is in photons—but the short circuiting of the development of optical quantum information processors in the United States means that the future Quantum Internet will have “Made in China” stamped all over it.

In an interview with Nature preceding the downturn that parallels later funding cuts, physicist Ivan Deutsch of the University of New Mexico in Albuquerque states: “Anyone who hears about this is shocked beyond belief—the world leader in quantum computing having funding being terminated based on a technicality seems incredibly short-sighted.” 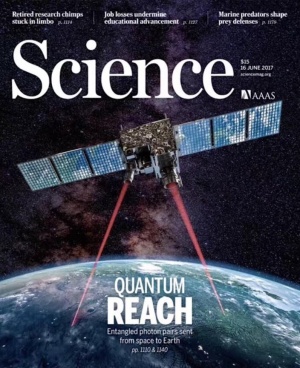 In competition that has forged its way ahead of the US satellite-based quantum communications program, a joint Austrian-Chinese initiative between the experimental physics groups of Anton Zeilinger and his former graduate student Jian-Wei Pan, known as Quantum Experiments at Space Scale, launched a quantum communications satellite in 2016 nicknamed “Micius” or “Mozi,” in homage to the Chinese philosopher's writings on optics.[20][21][22][23]

In 2017, China took an established lead with the first demonstration of secure quantum communications to a satellite, setting a new world distance record. In the June 16, 2017, issue of Science, Yin et al. report a new quantum entanglement distance record of 1203 km, demonstrating the survival of a 2-photon pair and a violation of a Bell inequality, reaching a CHSH valuation of 2.37 ± 0.09 under strict Einstein locality conditions.

The signal was transmitted from the Micius satellite to bases in Lijian, Yunnan and Delingha, Quinhai, increasing the efficiency of transmission over prior fiber optics experiments by an order of magnitude.[24] The group subsequently established a new world-distance record for free-space quantum teleportation.[25][26][27][28][29]

Together with the Austrian Academy of Science, the Chinese groups demonstrated the first-ever quantum secured intercontinental satellite video call on September 29, 2017.[31][32][33][34]