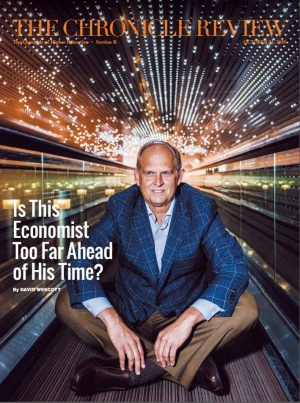 "Prof. Hanson is a research associate at the Future of Humanity Institute of Oxford University. He has a doctorate in social science from California Institute of Technology, master's degrees in physics and philosophy from the University of Chicago, and nine years experience as a research programmer, at Lockheed and NASA. Professor Hanson has over 3966 citations, a citation h-index of 32, and over ninety academic publications, including in Algorithmica, Applied Optics, Communications of the ACM, Economics Letters, Economica, Econometrica, Economics of Governance, Foundations of Physics, IEEE Intelligent Systems, Information Systems Frontiers, Innovations, International Joint Conference on Artificial Intelligence, Journal of Economic Behavior and Organization, Journal of Evolution and Technology, Journal of Law Economics and Policy, Journal of Political Philosophy, Journal of Prediction Markets, Journal of Public Economics, Maximum Entropy and Bayesian Methods, Medical Hypotheses, Proceedings of the Royal Society, Public Choice, Science, Social Epistemology, Social Philosophy and Policy, and Theory and Decision." - From the Biography page at George Mason Uiversity[1]

The Elephant in the Brain - TEDxAsburyPark - July 2017

We humans are primates, and primates are political animals. Our brains are designed not just to hunt and gather, but also to get ahead socially, often by devious means.[2]