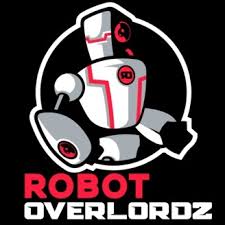 Robot Overlordz is a semi-regular podcast about the possibilities of our future.

"Our society is changing and we all have a role to play in shaping those changes. The show digs into that, through the lens of pop culture reviews, political commentary, technology trends, and social norms. Episodes typically run about 30 minutes or so. The first series of Robot Overlordz was hosted by Mike Johnston and Matt Bolton, while the current Series 2 is hosted just by Mike.

It started with the idea of the Singularity. If you're not familiar with the Singularity, check out our very early episode 15 where our computers explain the concept. But in a nutshell, it's where technology starts advancing so far that we just cannot tell any more what will happen. One of the primary technological advancements of the Singularity is assumed to be AI (artificial intelligence). One possible scenario that everyone is familiar with (thanks to the Terminator and Matrix movies) is that AI will decide that humans are unnecessary and wipe us out. But that seems like an awfully cynical and depressing worldview to us.

Another possible scenario is that we will merge with our technology, in effect becoming the Machine. In that sense, we will be the Robot Overlordz."[1]

- From the About Page on the Official Website, July 2014